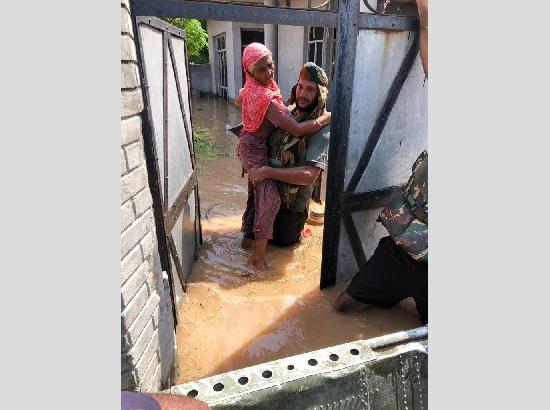 Jalandhar: August 21, 2019 : Army teams from Vajra Corps of Western Command are carrying out Flood Relief and Rescue operations as an aid to Civil Authority in the villages near Jalandhar to include Phillaur, Nakodar, Shahkot, SultanpurLodhi and Nawanshar adjoining river Sutlej in Punjab.

A total of 16 “Teams” of Army along with aviation resources have been employed in the ongoing flood relief operations which are being carried out round the clock to ensure safe evacuation of the affected populace. So far about 115 persons have been rescued to relief camps. The Army teams are also engaged in plugging the breaches along river Sutlej to prevent the water entering in the affected villages. Approximately 11 tons of food material have been dropped by Army Helicopters in 21 marooned villages to provide relief to the populace.