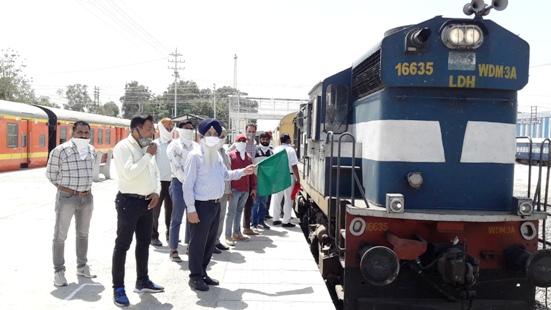 Ferozepur, May 26, 2020:  On Tuesday afternoon, 12th Shramik express train from Ferozepur moved for Bihar with 925 migrant workers of Malwa region.  The train was flagged off by Gurtej Singh Gill, Nain Tehsildar on special duty.

Divulging more, Kulwant Singh, Deputy Commissioner Ferozepur said, the migrant workers are being sent to their home town through special trains and today 12th train moved for Bihar.  He said, the Punjab government has made special arrangements for the stranded migrant workers in Punjab to send them to their home states, by bearing the fare cost.  For today’s train, the fare cost of Rs.9,52,000 has been borne by the government.

Apart from this, the migrants have been provided with food packets, water bottles, sanitizers for use during the journey. An advisory was also given to them to maintain social distancing as a preventive measure to curb the menace of the spread of threat of coronavirus while in contact with others.

These migrants have opted to move to their home towns, in the wake of having no work because of shutting down of various units in view of coronavirus threat and not likely to resume in the near future.  The cheering faces of migrants on boarding the train to join their families, spoke high about the arrangements by the government as without it, it would not have been possible to go back to their homes.

Maharana Pratap a source of inspiration for the whole of India: Tewari
Punjab Govt transfers 45 Police in the State
Comment