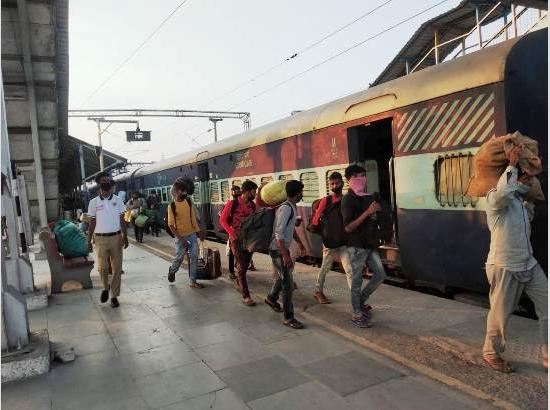 Ferozepur, June 6, 2020: Today, 350th Shramik Express train from Ferozepur rail division, moved from Ludhiana for Katihar in Bihar and 200th train from Ludhiana for New Kooch Bihar (West Bengal) with 1,600  migrant workers in each train, who consented for going to their home towns after relaxation in curfew-lockdown imposed in the wake of Covid-19 pandemic.

To come out of the corona threat, it is likely to take a long time and in the meantime, the Supreme court has also indicated that it intended to give 15 day’s time to the Centre and state governments to send home all migrant workers still stuck across the country due the Coid-19 lockdown.

Divulging with the details, Rajesh Aggarwal, Divisional Rail Manager, Ferozepur Division said, the railways on the request of the state governments have started operating the Shramik Express trains from May 1 and in Ferozepur division, it started moving from May 5 and so far, 353 such trains have moved from the Ferozepur Division, ferrying around 4.60 lakh migrant workers, who were without any work due to shut down of various units or consented for going back to their homes in this crisis.

All precautionary measures of screening by the health department, maintaining social distancing and wearing masks were ensured, before boarding the train.

On asking about the deaths in rail, DRM refuted saying that all reported deaths had occurred due to pre-existing ailments.  Around 4,228 trains had ferried home over one crore migrant workers and 90 per cent to them had already reached their native places.