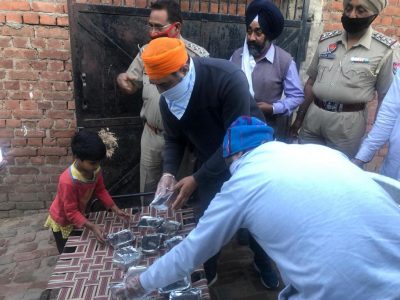 Jalandhar, March 29,2020: Continuing its spree to ensure payments to the labourers, the payments worth Rs 24 lakh was ensured to the 2000 workers in 40 factories by the Jalandhar Commissionerate Police.

Due to curfew these labourers working in factories, were facing trouble in maintaining their livelihood. In a goodwill gesture the Commissioner of Police took up the matter with the industrialists and asked them to pay the due wages of these labourers so they could meet any urgency. Accordingly 2,000 labourers from 40 industries were distributed Rs.  24 lakh.

Meanwhile, the Commissioner of Police said that these efforts would continue in coming days also so that maximum relief could be provided to the people of needy strata.

Bhullar said that in consonance with the glorious tradition of the Punjab Police, the Commissionerate Police has distributed 3398 packets of dry ration was also delivered to the needy people.

He said that the Commissionerate Police was committed to serve the people with full passion and zeal.

The Commissioner of Police said that the Police officers/ officials were rendering marvellous services to the people during the curfew. Bhullar said that this would continue in the coming days too adding that every step was being taken to facilitate the people in this hour of crisis.

He said that the Commissionerate Police was fully geared up and equipped to meet any sort of challenge whether of law and order or for fulfilling the basic requirements of the general public.