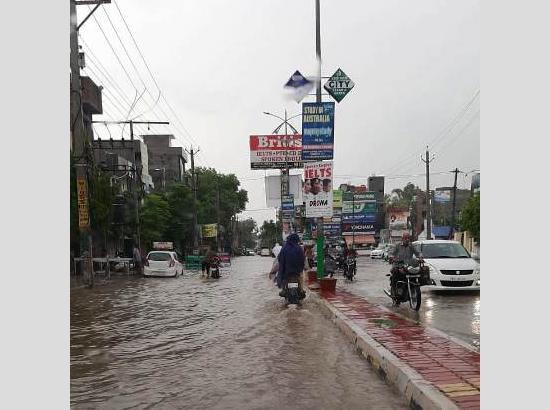 Ferozepur, July 16, 2019: The heavy rain that lashed the city in the morning and afternoon today virtually brought the city to standstill and exposed tall claims of the arrangements of the authorities and disrupted the routine life.

Even the recently sown paddy fields, vegetables were also flooded with water and damaged the crops.  Farmers outfits have demanded that immediate ‘girdawri’ orders may be issued and farmers may be compensated with Rs.40,000 per acre for the damaged crop. A majority of the areas in the city were flooded with knee deep rainwater due to inadequate arrangements for water drainage, causing lot of problems for the residents.

The newly constructed railway under bridge – RUB – was   the worst-hit as the rain water accumulated with rain water, which connects the city and cantonment and was a great relief to the people as they had to wait for more than half-an-hour sometime at the railway crossing which comes in between the shunting area. In the Amritsari Gate locality, the rainwater has entered the houses and family members were seen draining out the water. The Udham Singh Chowk on the Mall Road too was flooded with rainwater causing inconvenience to the vehicular traffic.