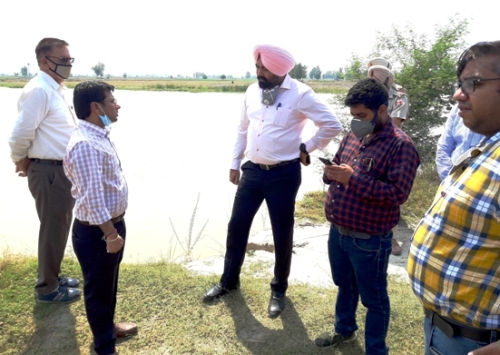 Ferozepur, July 5, 2016: Keeping in view the risk of floods due to rising water in the Sutlej river, the district administration is up in arms ahead of the rainy season.

DC said, during the last year, it was the very sensitive situation in the village Tendiwala and to ensure that it is not repeated this year also, a 600 ft long ‘ban’ will be constructed at a cost of Rs.75 lakh and will be completed within week’s time well before the rainy season.

Apart from this, to ensure all arrangements to stop flood-like situation, the work, such as repair of embankments, cleaning of studs, etc. will also be started in other villages.  The Dhusi bandh will also be strengthened at a cost of Rs.4 crore, he added.

DC also met the villagers of the area and advised to be alert during the rainy season and in the event of any problem or any requirement, a close liaison with the district administration officers must be kept.

To avoid any economic loss to anyone, DC said, the preparation have been started from now.  On this occasion, Sandeep Goyal, Executive Engineer, Surinder Sharma, SDO were also present( By HMD):