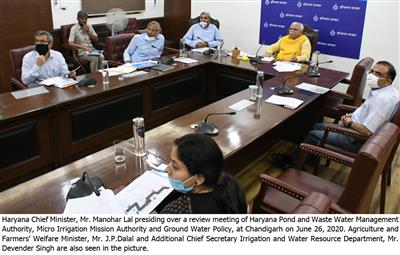 Chandigarh, June 26, 2020: – Haryana Chief Minister  Manohar Lal has directed to constitute a ‘Micro Irrigation Mission Authority’ and to prepare a plan for groundwater management at the district and state level in continuation of the ‘Mera Pani-Meri Virasat’ Scheme to ensure that not a drop of water goes waste.

The Chief Minister was presiding over a meeting called to discuss the schemes, with the Departments of Irrigation and Water Resources, Development and Panchayat and Public Health and Engineering, here today. After this, the Chief Minister reviewed the plans for formulating Micro Irrigation Mission Authority and schemes regarding groundwater management at the state and district level.

In the meeting, the Chief Minister instructed the officers of Haryana Pond and Waste Water Management Authority to treat the water of the ponds in rural areas with three ponds and five pond system and expedite the plan for judicious use of water for irrigation and other works. The Chief Minister was also apprised in the meeting that there are 16,350 ponds in the state, out of which 15,910 ponds are in rural areas and 440 ponds are in urban areas and a Pond Atlas has been prepared by GIS mapping of all the ponds. In its first phase, 18 ponds are being developed as model ponds, in which 11 standards are being adopted for putting this system in each pond.

It was also informed in the meeting that 2,606 ponds in rural areas are polluted and overflowing, while 7,963 ponds are polluted but not overflowing and 4,413 ponds have clean water. Constructed wetland technology is being adopted to treat the water of polluted ponds, wherein boulders are kept at three to four places, thereafter, wild weeds are planted and the water is treated subsequently. The Chief Minister said that it should be ensured that water of every pond is drained at least once a year and filled again with fresh water, through rain and other sources so that water can be circulated.

The Chief Minister said that to start with a pond should be developed as a model pond so that it can be adopted for other ponds. More than 95 percent of the work of the pond of Keorak village in Kaithal district has been completed and it can also be started by July 15. He said that pumps should be installed for drainage of every pond and solar pump system can be installed wherever possible to save electricity.

The Chief Minister has also directed to convene the next meeting of Haryana Pond and Waste Water Management Authority on July 25, 2020. The Chief Minister said that the work of preparing this project of ponds should be done by the students of Civil Engineering of Universities and Polytechnic institutions. It was also informed that the Authority had organized a workshop at the Haryana Irrigation Research Management Institute (HIRMI), Kurukshetra, in which 24 Universities had participated and the task of preparing drawings of 103 ponds was given.