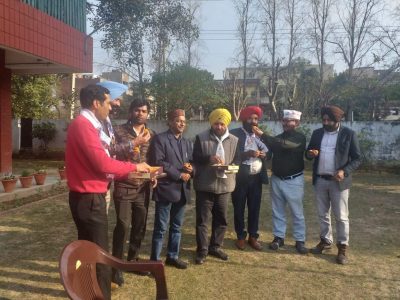 Delhi mandate: a victory of the good over evil force. People of Delhi have rejected the politics of hatred:  Harchand Singh Bursat

Chandigarh, February 11; The unprecedented victory of the Aam Aadmi Party (AAP) in Delhi Assembly elections for the third consecutive term was celebrated by a large number of party workers and well-wishers of Punjab unit of the party by distributing ‘ladoos’ in Chandigarh. The ecstatic workers and sympathizers also danced to the peppy beats of ‘dhol’ to celebrate the victory in a big way.

In a statement issued from party headquarters, senior party leader and leader of the opposition (LoP), Harpal Singh Cheema, said that the victory of the AAP in Delhi was the victory of good over the evil forces. He said that the people of the country had rejected the politics of hatred peddled by the BJP and voted for the Kejriwal government’s development agenda.

On the occasion, the political affairs committee, Harchand Singh Barsat, said that the historic victory of the AAP in Delhi had redefined the political narrative across the country, by rejecting the divisive forces hell-bent on destroying the social fabric of the country.

The AAP leaders said that the unprecedented victory of the party had sent out a message loud and clear across the country that the elected governments would have to work harder to bettering education, health care, cheaper electricity, safety and security of women, et al.

The AAP leaders, who were gung ho over the historic triumph of the AAP in Delhi, said the Punjab Unit of the party would replicate the Delhi model in Punjab in the 2022 Assembly election.

Others who were conspicuous by their presence on the occasion were Jaito legislator, Master Baldev Singh, spokespersons, including Iqbal Singh, Govinder Mittal (Advocate), Neel Garg and a large number of workers and activists.