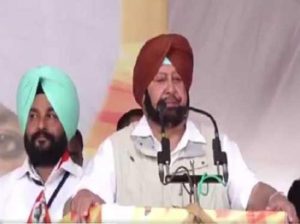 Faridkot, May 15, 2019 – Punjab Chief Minister Captain Amarinder Singh on Wednesday announced a memorial in or around Bargari for those who lost their lives or were injured in the unprovoked police firing on peaceful protestors in Behbal Kalan and Kotkapura.

Ridiculing Prakash Singh Badal’s claim of Bargari and other sacrilege cases being bygones, the Chief Minister said people never have, and never will forget the desecration of their holy scriptures, and the Akali supremo should be ashamed of even suggesting the same.

The Chief Minister was addressing a public rally here, along with Congress president Rahul Gandhi, in support of the party’s Faridkot candidate Mohd. Sadique.

The Sikhs had not forgotten, in 500 years, the sacrifice of any member of their community, he pointed out, adding that it was shameful that Badal, at the age of 93, had not yet realised this stark truth.

“How can anyone forget what happened during the rule of the Badals? Not one or two but 58 Sri Guru Grant Sahibs were desecrated, not to count the Gutka Sahibs, Bhagwad Geeta, the Bible and the Quran which were burnt or torn,” he lashed out.

What happened in those months, including at Bargari, and the incidents of police firing on those protesting peaceful against sacrilege, right under the nose of Badal is not something that Punjab can ever forget, said Captain Amarinder, adding that the firing could not have taken place without Badal’s knowledge and he was clearly to blame.

The Chief Minister recalled how he had been told by the affected people that the SP came suddenly and ordered firing, with the cops gunning down people who were fleeing. This is not the way such incidents are handled, he said, adding that if firing is at all needed, it is done by a small police unit, accompanied by a magistrate who assesses the situation and finds apprehension of trouble and asks for a single shot to be fired at one individual.

Badal, and the rest of the Akalis, know what had happened was wrong and that the people had neither forgotten nor forgiven them for the same, he said, adding that this was the reason why they were now running around desperately for votes.

Asserting that Punjab would never forget what had happened here, the Chief Minister said he would form a committee of local residents to decide what kind of memorial they wanted to be constructed and his government would have it built in remembrance of those who became innocent victims of the Akali crimes.