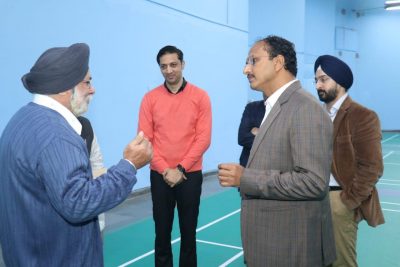 Jalandhar: In another landmark for the city, Jalandhar has become the first city in the state to have five ultra-modern synthetic courts for preparing the players for the national and international events in Raizada Hansraj Stadium.

Pertinently, all the national and international badminton events across the globe were organized on these courts but there was no synthetic court in the city for the budding players due to which their practice used to suffer a lot.

Terming it as a historic milestone, the Deputy Commissioner said that this would open new vistas of badminton for the budding players and provide them better opportunities to excel in the arena of sports adding that it would help in better grooming of players for national and international events.

He said that this was in consonance with the commitment of the Punjab government to provide state-of-the-art infrastructure to the budding players for enabling them to perform well. Sharma said that more such efforts would be made in the coming days by the district administration and District Badminton Association for ensuring the welfare of the players.

The Deputy Commissioner also said that the Public Works Department would be instructed to prepare detailed estimates for enhancing infrastructure in the girls and boys hostel besides ensuring optimum utilization of the existing resources.