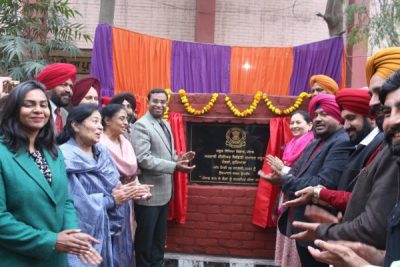 The Dhandra cluster is being developed with a cost of around Rs 100 crore under the Shyama Prasad Mukherji Urban Mission, under which, 21 panchayats, villages and colonies have been included and these areas will get city-like facilities.

While speaking on the occasion,  Aruna Chaudhary said that for providing city-like facilities in rural areas, the government has started Shyama Prasad Mukherji Urban Mission and Dhandra cluster has been approved under it. Several development projects for overall development of the rural areas will be carried out under this mission. Residents of the areas falling under the Dhandra cluster will get proper sewerage, roads, solar lights and other basic facilities. Besides, other development projects that were left incomplete due to a shortage of funds, will also be completed under the mission.

Gill MLA Kuldeep Singh Vaid informed that the Multipurpose Business Centre would be constructed with a cost of around Rs 5 crore. He said that once complete, this business center would become a permanent source of income for the panchayat of village Dhandra. He said that the village panchayat has provided 4-acre land for this project and it would be handed over to the village panchayat upon its completion. Vaid stated that the panchayat would be easily able to earn around Rs 20-25 lakh on the completion of this project.

During another function, Aruna Chaudhary inaugurated Government Senior Secondary Smart School at Hambran, near here today. While addressing the gathering on the occasion, she said that with the help of e-content, the students would be able to understand subjects in an effective manner. Smart classrooms have been constructed in the school with a cost of around Rs 14 lakh.

MLA  Kuldeep Singh Vaid informed that with the start of e-content in this school, the number of students in the school has increased manifold. He also stated that the Capt Amarinder Singh led Punjab government has been developing smart schools in all parts of the state.

Cabinet Minister  Aruna Chaudhary would be the chief guest during the district-level Republic Day celebrations at Guru Nanak Stadium tomorrow and would unfurl the national flag there.

Pb Govt committed for Women Empowerment,Bindra
No voter is to be left behind: Deputy Commissioner Girish Dayalan
Comment