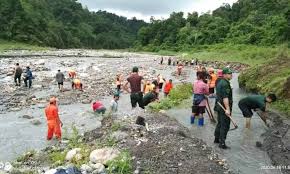 A news report published in a section of the press in Assam said that Bhutan is blocking water supply to Assam. It has been said that hundreds of farmers from 25 villages of Assam’s Baksa along the Indo-Bhutan the border had alleged that Bhutan government is not allowing farmers from the Indian side to channelize water from Bhutan’s side for irrigation.

Assam Chief Secretary Kumar Sanjay Krishna on Thursday clarified through a tweet that Bhutan blocking water supply to India has incorrectly been reported in media rather the neighboring country is helping to clear the blockage. The Chief Secretary stated that the actual reason is the natural blockage of informal irrigation channels into Indian fields.