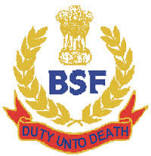 On 23 Nov 2019 during night hours, on duty alert BSF troops of heard some suspicious sound and got alerted. Therefore, troops noticed movement of some suspects ahead of Border Security Fence. To stop the misadventure of Pak smugglers/ANEs Border Security Force troops challenged the suspects and opened fire but Pak suspects managed to escape taking advantage of undulating ground. Later, during search 06 packets of contraband suspected to be heroin (Total weight approx. 3 Kgs) a/w 01 Pak SIM card were recovered from the spot.