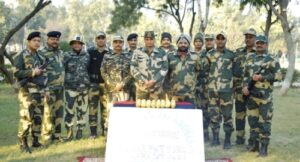 However, there had been a decline in the seizure of heroin along the Indo-Pakistan border in the last couple of years and the beg off in seizure of heroin to better security measures and enhanced coordination of information amid various security and intelligence agencies.

On 09 Jan 2020 during night hours, on-duty BSF troops heard some suspicious sound and got alerted. Therefore, troops noticed a movement of some suspects ahead of Border Security Fence. To stop the misadventure of Pak smugglers/ANEs Border Security Force troops challenged the suspects and opened fire in self-defense but the suspected smugglers managed to escape taking advantage of dense fog and undulating ground. Later, during search 08 packets of contraband suspected to be heroin (Total weight approx. 4 Kgs) were recovered from the spot.
Vigilant troops of Border Security Force once again thwarted the attempt of Anti-National Elements to push the consignment of contraband items into India.