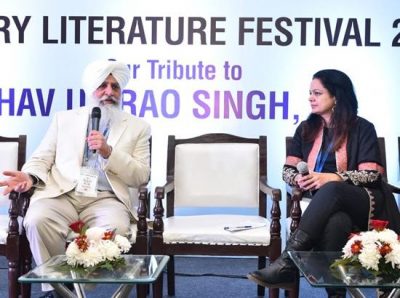 Chandigarh, December 13, 2019: A special session to discuss the accounts of the book ‘Camel Merchant of Philadelphia’ focusing on stories from the court of Lion of Punjab — Maharaja Ranjit Singh — was organised on the first day of Military Literature Festival.

Sarbpreet Singh, author of the Camel Merchant of Philadelphia, said that this book explored the stories of Sikh court of Ranjit Singh, who was declared the Maharaja of Punjab in 1801 and occupied a kingdom that stretched from the borders of Afghanistan to those of the British Raj.

The author examined the emperor’s relationship with figures such as his mother-in-law, Sada Kaur, and the truculent leader of his army, Akali Phoola Singh.

He further said that it unveiled the untold stories of Maharaja Ranjit Singh and other parallel personalities such as Raja Dhian Singh, Gulab Singh and Suchet Singh.

There were the Sikh chiefs, among them the Sandhawalias and Attariwalas; the Fakir brothers Azizuddin, Imamuddin and Nurudeen.

He said this book also entailed the stories of the queens, each more beautiful than the other, down to the mercurial Rani Jindan who was to play a major role during the fading years of the Sikh kingdom leading to the decline of Punjab.

Talking about the title of the book, Sarabpreet Singh said that he was working in the profession of marketing and technology so he chose this title to arose the curiosity about this book.

He said that General Josiah Harlan – the Camel Merchant of Philadelphia who began life as a Quaker, achieved prominence within Ranjit’s court.