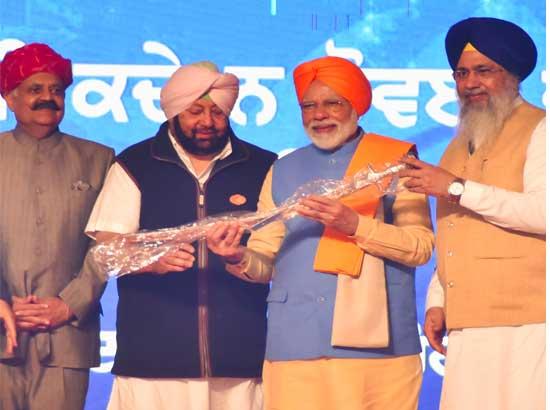 TERMS IT FULFILMENT OF EVERY SIKH’S ARDAS, CONGRATULATES DEVOTEES OF BABA NANAK SETTLED ACROSS THE GLOBE

Dera Baba Nanak, November 9, 2019: Terming it as a historic moment, the Punjab Chief Minister Captain Amarinder Singh on Saturday expressed hope that Sri Kartarpur Sahib corridor would lead to overall peace and harmony between both countries facilitating easy access to other Gurdwaras in Pakistan allowing Khule Darshan Didar to all devotees.

Addressing a mammoth rally just before crossing over to Pakistan to pay obesiance at Sri Kartarpur Sahib, the Chief Minister said that the opening of corridor would lead to strengthening of mutual ties between the both countries, which would give further impetus to overall development and growth. Thanking Prime Minister Modi for fulfilling long cherished demand of passage to prestigious Sikh place, Captain Amarinder Singh said all  punjabis including the entire Sikh community was grateful for this gesture. The opening of Corridor is fulfillment of our ardas, the Chief Minister said congratulating devotees of Guru Nanak Dev Ji settled across the globe.

Expressing his gratitude to PM for coming over to inaugurate the Corridor, Captain Amarinder Singh stated that the momentous occasion had once again joined the Sikh community with the scared place in our collective history which the sad partition of 1947 had snatched away from us.

The Chief Minister said that he had been blessed to pay obeisance at Sri Nanakana Sahib twice besides offering prayers at Sri Panja Sahib once, Captain Amarinder Singh said expressing happiness that now he would also be able to go and pay his respects at Gurudwara Sri Darbar Sahib, Kartarpur.

We owe this to our Guru Sahib, the Chief Minister said adding that by failing to take care of our surroundings we would fail in our duty to the Almighty.

On the occasion, the Chief Minister joined PM Modi in releasing a commemorative Rs. 550 coin and five postage stamps with pictures of five historical Gurdwaras related to the first Sikh Guru.

Later addressing the rally Prime Minister Narendra Modi stated that with the blessings of Guru Sahib today he was getting the chance to dedicate the Sri Kartarpur Corridor and the integrated check post established at Dera Baba Nanak to the people.

Thanking the Captain Amarinder Singh led Punjab Government and the SGPC in ensuring the completion of the Corridor in due time, PM Modi also expressed his gratitude towards Pakistan PM Imran Khan.

Guru Nanak Dev Ji’s life is an ideology in itself and his teachings serve as a guiding light for our conduct and behaviour, the Prime Minister said. Modi motivated the people to practically follow the teachings of Guru Nanak Dev ji and said that Sri Kartarpur Sahib is blessed place where Guru Sahib had shown the practical implementation of his teachings which includes ‘Kirat Karo’, ‘ Naam Japo and ‘Vand Shako’. Mesage of universal love and brotherhood echoed by Guru Sahib at Sri Kartarpur Sahib would always enrich and guide us in all our future endeavours, the PM added.