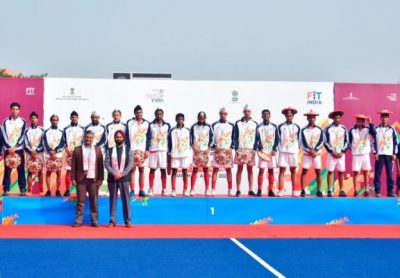 Guwahati,January 21,2020 : Four action-packed hockey matches held here at the Maulana Md. Tayabullah Hockey Stadium on Monday saw Chandigarh and Haryana bag the gold medals in the U17 Boys and U17 Girls competitions of the Khelo India Youth Games 2020 respectively. Chandigarh defeated Uttar Pradesh 2-0 in a penalty shootout after the scores were locked at 2-2 after regulation time.

Meanwhile, Haryana were involved in a nervy encounter where they conceded an equalizer with just one second remaining on the clock, but still ended up winning the following penalty shootout 2-1 after the scores were tied at 2-2 at full-time.

The hockey U17 boys final saw Chandigarh twice come from behind to beat Uttar Pradesh. The two goals for Uttar Pradesh were scored by Arun Sahani in the 6th and 43rd minutes, but Chandigarh’s Deepak Kumar (17th) and Sumit (50’) scored to make it 2-2, and take the tie into the penalty shootout where their goalkeeper Bikramjit Singh was the star, as he made four consecutive saves to win the gold for his team.

Chandigarh, who had finished second in Pool A with two wins and a loss, had defeated Punjab 3-1 in the semi-finals before winning the final match on Monday. Their coach, Gurminder Singh appreciated his team’s performances, “I am really happy with the way our team played. We executed our plans brilliantly today because we had lost 2-8 to them in our Pool A match. However, during the final it was more about countering their tactics, and making sure we were always focused on the task ahead.”

While, the hockey U17 girls final   between Haryana and Jharkhand took a turn in the very last moment of the match, as Jharkhand scored with just a second remaining on the clock, to make the scores 2-2 at the end of normal time. Earlier, Haryana had scored first in the match through Pinki (13th), but Jharkhand equalized in the 35th minute through Deepika Soreng. However, Haryana scored in the next minute to restore their lead through a Penalty Corner, as Dimple converted. Jharkhand’s Deepika Soreng found herself at the right spot again in the last minute of normal time, as she thumped the ball into the back of the net to equalize for the second time. In the shootout, Jharkhand converted their first shot, but failed to find the target in the next five, giving Haryana a much deserved 2-1 win.

Haryana’s impressive outing in the Khelo India Youth Games 2020 had started with them topping their Pool A with a tally of 6 points from three matches, including two wins, which saw them beat Odisha 1-0 in the semis. Their coach, Ruchika, seemed delighted with the win, “It is good for the girls to have won today, but I think we should have won it in normal time. It is always good from the fans’ point of view to see such exciting matches, but I would have taken a win in normal time.”

Earlier, the U17 Girls bronze medal match saw Odisha take a 2-0 lead inside the first 17 minutes through Jyoti Chhatri and Ashima Rout to put themselves in a commanding position. Hosts Assam tried to put some pressure in the second half, but could only score once in the 53rd minute through Milka Surin as it proved to be too little, too late.

The U17 Boys bronze medal started a series of three matches which went into penalty shootouts. It was Punjab who started the match with a goal in the 15th minute through Ravneet Singh, but Odisha scored two goals in the second quarter through Paulus Lakra (19’) and Jasman Munda (25’) to turn the tie around. However, the last minute of the match saw Punjab score a wonderful field goal through Arshdeep Singh Jr to take the tie into a penalty shootout. In the shootout, it was Punjab who prevailed through some great reflexes from their goalkeeper Navdeep Singh to win 3-2.