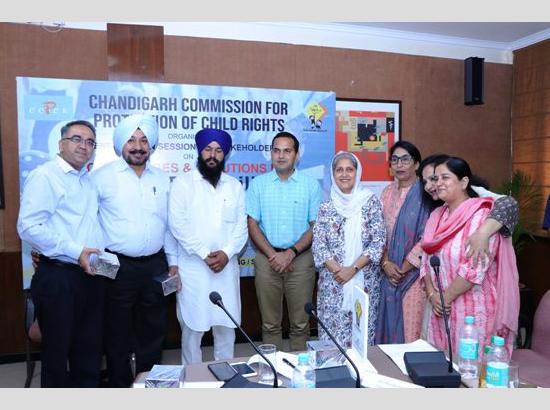 Harjinder Kaur, Chairperson, CCPCR welcomed the chief guest and all other invitees from various departments and civil society. She reported with a happy note that some markets have been made child labour free but it is not enough. We have to work more zeal with dedication in a coordinated manner to tackle this social issue which has legal implications. She stressed to make the stakeholders accountable to get the result in time bound manner and commission will take the issue with the Chandigarh administration at all level.

Sangita Vardhan gave the keynote address and elaborating social causes of child labour. She further said that prevention is more important than rescue and stressed more coordination among different stakeholders.

Varun Beniwal, ALC, Labour Department, assured full support of his department and hope to eliminate child labour with coordinated efforts in future. Inspector Sukhdeep Singh, Anti Human Trafficking Unit (AHTU), Chandigarh suggested one unit comprising officials from all the related department operating be set up for prompt action if required. He further suggested that a special vehicle be arranged with a team for child rescue immediately.

Mahavir Singh, Member Secretary, SLSA sensitize the participants of various provisions of the Child Labour (Prohibition and Regulation) Amendment Act, 2016. He further stressed the moral responsibility of civil society and the legal responsibilities of government agencies in this regard and their convergence. He also suggested having one nodal officer to be designated from each concerned department for effective implementation of the provisions of the act.

Kamal Kishor Yadav, IAS, Commissioner Municipal Corporation showed happiness to note that all the stakeholders sitting together to eradicate this problem and hoped that with such coordination we will get positive result definitely. He assured his full support for this noble cause to the Commission.

The Conference ended with vote of thanks given by Dr. Monica M Singh, Member CCPCR.