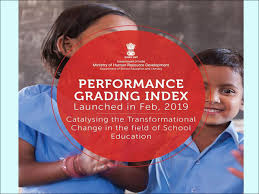 CHANDIGARH—State of education in Chandigarh has become a thing of the past if recently released performance grading index (PGI) by the MHRD is of any indication. Given the thrust of the Chandigarh Administration on zipping up infrastructure in schools for the past one decade has taken education to a perfect future. Vision-2010 which aimed at providing government schools with the enabling provision to shore up education standards starts paying dividends.  In the recent past education in the city has been taking big strides and registering its footprints on the national map.

In total Chandigarh has scored 896 out of 1000 scores and retains the top slot in the country and left its big cousins—Punjab and Haryana—behind. While Haryana bracketed at 10 positions compared to Punjab 13 position. On the other, Himachal Pradesh retained the sixth position.

Last year, the city scored 841 out of 1,000 points. Chandigarh together with Gujarat and Kerala has jumped to level-III (score 851-900) or Grade I+. According to the statement by MHRD, it was the first such instance when two states (Kerala and Gujarat) along with a UT (Chandigarh) have crossed the threshold of 85 per cent PGI score and reached Grade I+.

While talking an official of the Administration said that more or less all educational institutions have been interconnected through UT-wide networks. “This is serving as an icing on the cake of infrastructure baked by the Administration. More than 85 per cent government schools in Chandigarh are equipped with science laboratories and have well-stocked libraries. More than 20 senior secondary schools can boast of their own computer labs. All this enables government schools to lock horns with their leading public and convent schools.

All schools have been totally automated. Students have not only computers on their study tables but also have access to the internet in their classrooms. It is not for nothing that government schools of Chandigarh are becoming a draw and facing a lot of admission rush, adds the official.

The report has been prepared with a set of 70 parameters divided into five categories—learning outcome and quality; access; infrastructure and facility; governance process and equity. The city has scored 160 points out of 180 in learning outcome and quality, 76 out of 80 points in access, 136 out of 150 points in infrastructure and facility, scored 310 out of 360 in the governance process and 214 out of 230 points in equity.

For the academic year 2018-19, this performance grading index is applicable. The index has been made by MHRD after holding discussions with NITI Aayog. In 2019, the PGI for the states and union territories was first published for the reference year 2017-18. The current publication, PGI 2018-19 at State/UT level, has been drafted with the same set of 70 factors used for PGI 2017-18.

Chandigarh has displayed the highest improvement (13.89 per cent) in government processes that deal with pointers pertaining to management and administration of school education. The UT displayed minimum improvement in the equity domain (0.43 percent) which deals with pointers pertaining to the comparative performance of learning results of several categories of students including general, scheduled castes/scheduled tribes, rural and urban areas, boys and girls. It also takes into consideration children with special needs (CWSN).

The PGI indicators have been classified into two broad groups – governance and outcome processes.