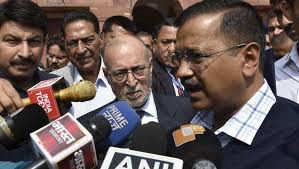 New Delhi,  February 25, 2020 : Chief Minister  Arvind Kejriwal took a number of measures on Tuesday to stop the violence spreading in Delhi. Earlier in the morning, the Chief Minister held a meeting with the MLAs and senior officials at his residence and instructions were given to take all necessary steps to establish peace.
In the afternoon, Arvind Kejriwal attended a meeting with the Union Home Minister Amit Shah, the Lieutenant Governor of Delhi Anil Baijal, the Delhi Police Commissioner and leaders of all political parties. In the meeting with the Union Home Minister, Arvind Kejriwal appealed to deploy additional forces in Delhi and allowing the police to take necessary action.
After this, the Chief Minister reached Rajghat with Deputy Chief Minister  Manish Sisodia, all ministers and the MLAs and conducted a prayer for peace in Delhi. Followed by this, CM and other ministers visited the injured police officers and people in various hospitals. He also instructed the hospital authorities to ensure best possible treatment for the victims.
Arvind Kejriwal also visited the house of the martyred police officer in Burari during the violence. He paid tribute to the mortal remains of the police head constable and consoled the heartbroken family. The Chief Minister appealed the people of Delhi to join hands together to stop violence, saying that no one is going to benefit from violence and every issue will be resolved through peaceful negotiations.
Law and order situation worsening in Delhi, appeals to the people of Delhi to join hands and maintain peace – Arvind Kejriwal
Immediately after the meeting with the MLAs and officials,  Arvind Kejriwal said in a press conference, “The violence that has erupted in the North-East Delhi for a few days is a matter of grave concern for all of us. I want to appeal to the people of Delhi, to maintain peace and harmony. All of the problems can be resolved with a peaceful discourse on the matter. Violence is never the answer”.
“We are saddened to hear that a head constable of the Delhi Police and a few civilians have lost their lives. Many have been injured in the clashes. They were our people, people of Delhi and people of the nation. They also had families. We have to realize that if the current clashes continue, they can affect others too. This situation is not in order. People’s houses and shops are burning, vehicles are burning, public property is being damaged. The loss is ours”, he added.
“I met with the MLAs of the affected areas just a while back. Hospital authorities in the area have been alerted and instructions have been provided to them so that the injured people can get proper treatment. The fire department has been instructed to coordinate with the Police so that they can reach the affected areas in time. All the MLAs are worried about the insufficient strength of the police personnel. Also, police officials are unable to act on the situation unless they get orders from the senior officials”,  said Arvind Kejriwal.
“The MLAs of the border areas have also noted that miscreants are entering the borders in huge numbers. The borders need to be sealed and preventive arrests of the miscreants need to be made. I have also directed the SDMs of the areas to take out a peace march along with the local police officials. Peace committees at the local level must conduct meetings, inviting MLAs and members from all the religions and communities.
The temples and mosques situated in the affected areas must also appeal to the people to maintain peace and calm. I have also requested the  Chief Secretary to speak to the DCP to strengthen the police task force to control the situation of violence in Delhi”,  Arvind Kejriwal added. (Photo:Courtesy:hindustantimes.com)
By Lipakshi Seedhar

Lifeline UDAN flights transport 161 tons of cargo across the country