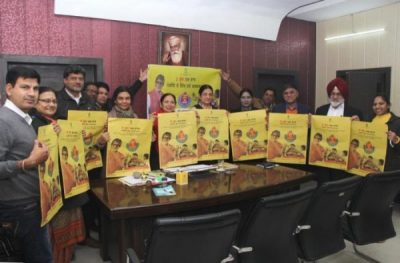 Jalandhar, January 15, 2020: The Civil Surgeon Dr. Gurinder Kaur Chawla on Wednesday released a pulse polio poster to create awareness among the people regarding National Pulse Polio Campaign which would be held from January 19 to 21 in the district.

Dr. Chawla said the teams of the health department will administer the polio drops to    2,43,044 children between the age group of 0-5 years in this campaign.

Civil Surgeon said that a total of 2097 teams have been formed for the successful organization of the drive which will cover 543429 lakh houses, bus stand, railway station, 165 brick-kilns, 31 under-construction sites, 667 high-risk areas, and 232 slum areas.

She said that for the first day (January 19) of drive, 1076 polio booths will be set up in the district and next two days, the polio teams will visit door to door to administrating the polio drops. She said that the mobile teams will administer polio vaccine to children living in semi-urban areas, slums, small-big factory campuses, and transit teams will administer drops to the children at bus stands, railway stations.

Dr. Chawla added that the health department would make concerted efforts for making Pulse Polio Campaign a huge success in the district. She said that all arrangements have been made regarding the pulse polio campaign and added that although India is declared polio-free, some cases are reported in neighbouring countries. She appealed to the residents to assist the health teams in carrying out this drive successfully.