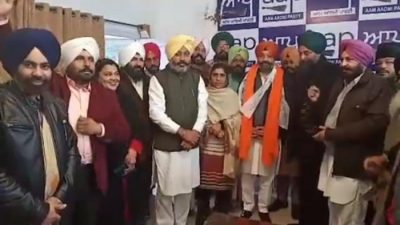 Chandigarh, December 24, 2019:The Aam Aadmi Party (AAP) got a shot in the arm here on Tuesday when senior Congress leader, Rupinder Singh Mundi, joined the party in the presence of its top leadership.

Rupinder Singh Mundi, a senior leader of the Congress Party, an associate of the Congress legislator, is has been active in social service and politics for a pretty long time now. Keeping in view his vast experience in politics to credit, Mundi was appointed spokesman of the party.

Addressing media persons here on Tuesday, Mundi said that the Captain Amarinder Singh government was installed in the state and the people had great expectations from it, but it had disappointed people by reneging on its poll promises.

He said that he was greatly inspired by the achievements of the Arvind Kejriwal-led Delhi government, which inspired him to join the party.