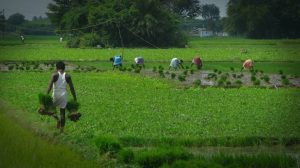 NEW DELHI 25 July 2020 – Indian farmers have planted 79.9 million hectares with summer crops so far, according to the Ministry of Agriculture & Farmers’ Welfare, up 18.3% from last year as robust monsoon rains spurred sowing in the world’s leading producer of farm goods.

Monsoon rains play a crucial role in agriculture, which employs 50% of India’s 1.3 billion people, as nearly half of the country’s farmland lacks irrigation.

The farm ministry provides updates on the provisional sowing figures as it gathers information from state governments. The planting figures are also subject to revision depending on the progress of the June-September monsoon season.

Sowing of soybeans, the main summer oilseed crop, stood at 11.4 million hectares, compared with 9.7 million hectares at the same time in 2019. Soybean output is set to jump by at least 15%.

India has received 6% above average rainfall since June 1.

The weather office defines average, or normal, rainfall as between 96% and 104% of a 50-year average of 88 cm for the entire four-month season.

Water levels in the main reservoirs were at 39% of their storage capacity, against 25% at the same time last year.