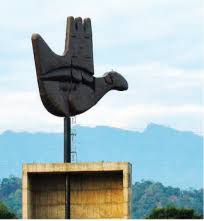 CHANDIGARH—What the governments could not do in controlling pollution despite a number of initiatives, telecommuting during the CORONA epidemic has done and it had an unintended consequence—the better air quality.  Social distancing in Chandigarh has decreased the number of vehicles dramatically on roads.  Vehicles clogging the roads in Chandigarh by the day, and the mushrooming number of rickety and smoking sending the pollution level soaring to a new height, the State Transport Authority (STA), Chandigarh has evolved a two-pronged strategy to contain pollution has failed.

“City has been experiencing satisfactory or poor category of pollution for the past four-five years, now air quality has improved and skies are clearer over the city, thanks to fewer vehicles on roads and that too improve the air quality index of Chandigarh every hour,” said the official of Pollution Control Department. He further added that less traffic meant less pollution and fewer fine particles in the air.  He also revealed that fine particle pollution also known as PM 2.5 was in control. It can enter the bloodstream through the lungs and has been linked to asthma attacks, heart attacks and respiratory problems.

On Wednesday, the city has recorded air quality index 33 means that if AQI is up to 50 it is considered as good. At present, the city has average Nitrogen Oxide ( a pollutant primarily from burning fossil fuels) was 12 and a maximum of 15. It is an unprecedentedly dramatic drop in emissions, admitted the official. Experts opinioned that in the coming days due to lockdown pollution would further drop and air quality would improve. Airline pollution is further expected to decrease in the coming weeks due to canceled flights and travel restrictions.

For the past five years, the air quality of Chandigarh has been deteriorating and the city was included in the list of 100 cities where PM level has been increasing continuously fixed level. The Chandigarh Administration has recently chalked out an action plan and the ministry of environment has sanctioned Rs 10 crore for implementation of this plan.

It is estimated that the city’s carbon emissions have dropped by a quarter over the past month. There is potentially a health benefit but any gains due to a drop in pollution are set against the toll taken by the CORONA outbreak.

Even a short term reduction in air pollution can make a difference, say the experts and add with improvement in air quality brings a reduction in health-related problems.

5 Netflix Shows to Watch During the Lockdown