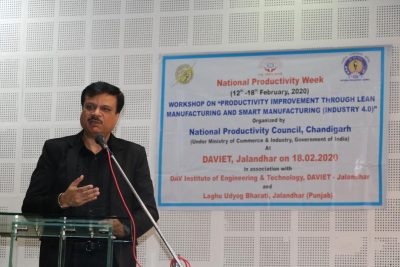 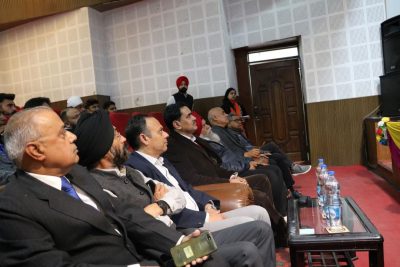 Dr. Gaurav Dhuria, Head of Mechanical Engineering Department welcomed the guests and speakers on the workshop and apprised about the relevance of the workshop. He said that the workshop shall focus on the three key areas and will provide an ample opportunity for the industry and academia to come on a common platform to move together for the development of the two sectors.

Principal, Dr. Manoj Kumar, DAVIET gave a warm welcome to all. In his address, he expressed the idea that students should move for internships in the industries on live projects during their summer vacation and even suggested that they are treated like employees over there so that they can be trained according to the industry requirements. He also talked about bridging the gap between industry and academia.

Harish Gupta discussed the concept of setting up casting clinics in the institutes.

The first session started with the address of Dr. Rupinder Singh. He expressed his views on ‘waste minimization through additive manufacturing’. He said that 3D printing and RPT are prevalent in the industry and the same can be tapped to even make components out of waste. He cited several case studies wherein utilization of waste such as eggshells and plastic waste has the potential for making some biological components such as teeth and mold for hip joint respectively.

In the Second session, Rajesh Solanki spoke on Lean Manufacturing. He put light on concepts like 5S, Kanban and 3M. He suggested that how non-value added time can be reduced from value-added activities. He also talked about inventory reduction and Japanese concepts like JIT and KAIZEN.

The third session started with the address of Ankur Dhir and S.P. Singh. They expressed their views on Industry 4.0. Ankur Dhir discussed various stages of the industrial revolution. According to him, India cannot afford to miss the industry 4.0 revolution. Skill-sets are needed by modern technocrats. He explained concepts like bio-sensors, cyber-physical systems, artificial intelligence, big data and deep learning.

Faculty members of the department and students of the Mechanical Engineering Department of the institute also attended the one-day event.

HMV will serve food to needy people on its 94th Foundation Day,Sareen