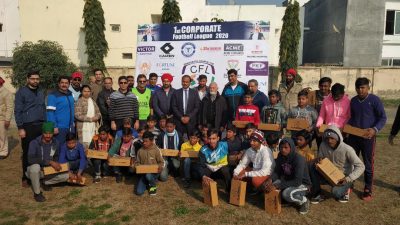 Speaking after formally inaugurating the league,  Sharma lauded the organizer’s Democratic Council and said that it was need of the hour to promote other games like Hockey, Football, Cycling, Swimming, Badminton and other sports among the youths. He said that these sporting activities keep one healthy and mentally fit.Sharma said that the Punjab Government is committed to giving a major boost to the sports in the state for which the sports infrastructure is being developed in the state.

He told that the government is also providing the sports kits to youths and clubs to inculcate the habit of participating in sports among them.

Sharma added that sports help the youths to develop a team the spirit which could help them to excel in their lives. Deputy Commissioner added that this same spirit can be used for bringing reforms in the society and asked them to contribute to making the mission a grand success by channelizing their energy towards the sports.

He said that the need of the hour was to popularize sports culture amongst the children as well as the youths. Lauding the participants, he said that the games develop a team spirit during the game among the players, which could help them to excel in their lives. The Deputy Commissioner said that this same spirit should be replicated for constructing a progressive and harmonious society. He asked the budding players to lay due focus on the study along with the Sports for the comprehensive development of their personality.

Rani wins The World Games Athlete of the Year 2019 award