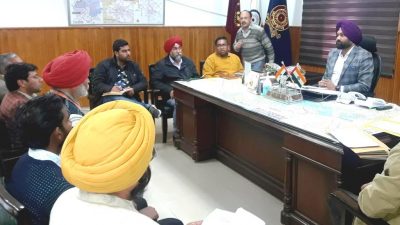 Presiding over a meeting at his office to review the flood managements, the deputy commissioner has directed all the officials to prepare an estimate report in a priority-wise segment to lay emphasis over the most urgent works.

He said that the district has already witnessed floods during the last monsoon due to breach on the banks of the river Satluj, so the administration has to be extra cautious this year especially keeping in view the heavy snowfall in the hills during the current winters, he added.

He said that our preparedness should be foolproof to combat any kind of situation adding he asked all concerned departments to work in full coordination to prevent any kind of flood-like situation this year.

The deputy commissioner directed the irrigation and drainage department to prepare consolidated priority-wise estimates which have to be submitted to the state government so that these works were completed before the advent of the monsoon season this year.

Kulwant has asked the SDMs to minutely prepare the detailed estimates of flood protection works for the areas on the banks of river Satluj. He said that this would help in ensuring a foolproof mechanism to prevent the loss of life, property or cattle in coming monsoons. He said that the proposals must incorporate works of strengthening the embankments of the river and the straightening/ strengthening of embankments constructed during the floods in 2019.

The Deputy Commissioner said that these estimates would be sent to the state government for its approval and subsequently the work would be kicked off at the war footing. He told the officers that any sort of callousness in this cause was totally unwarranted and undesirable as he would be personally monitoring this task regularly.