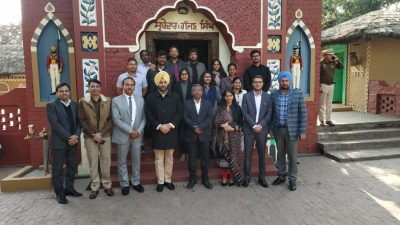 Ask them to perform their duty diligently

Welcoming the young officers , the top brass of the district administration, during the deliberations, apprised them about the glorious cultural heritage of the state. They said that besides being the sword arm of the county, Punjab also has the distinction of being the ‘Food bowl’ of the country. They said that hard work and resilience were the basic characteristic of every Punjabi due to which they were well-acclaimed across the globe.

The officers also asked the young probationers to discharge their duties with utmost dedication, sincerity, honesty and professionalism. They hoped that these newly appointed officers would certainly take the country to the zenith of its glory. They also asked the young civil Servants to serve the public with missionary zeal.

The senior officers also congratulated the young brigade for cracking the UPSC Exam successfully and subsequently got selected on the coveted posts. Wishing them a promising career and a bright future ahead, they asked the officers to serve the society with full enthusiasm and devotion for cherishing their aspirations by implementing the policies and programs of the government in the right earnest.

The Deputy Commissioner Jalandhar Varinder Kumar Sharma today said that in consonance with the commitment of the state government all-out efforts would be made for restoring the pristine glory of Sports College in the city.