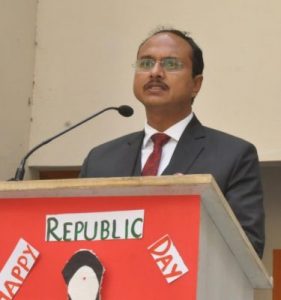 Jalandhar, January 25, 2020: Deputy Commissioner Jalandhar Varinder Kumar Sharma today said that the youth of the country must take inspiration from the supreme sacrifices made by the Armed forces to safeguard the borders of the country.

Addressing the gathering during a function organized by Dainik Savera Group to facilitate the kin of martyrs from Armed forces here at Guru Nanak Foundation Global School, the Deputy Commissioner, accompanied by Joint Director of Dainik Savera Group Abhishek Vij, said that the countrymen must remember these brave hearts as a mark of respect towards the supreme sacrifices made by them. He said that the country which forgets its national heroes could not make progress at any cost. Sharma further said that it was the moral duty of every countrymen to pay homage to these heroes of the country. 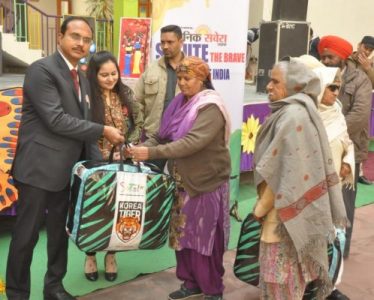 Lauding the stellar role of the Indian Armed Forces, the Deputy Commissioner said that it was a matter of great pride for all the countrymen that Indian Armed Forces were always on the forefront for defending the unity and sovereignty of the country besides guarding its borders while performing their duty. He said that countrymen enjoy the fruits of independence because of these brave hearts, who were constantly safeguarding borders while performing their duty.  Sharma called upon the people to salute the martyrs for their supreme sacrifice and courage.

Hailing the Dainik Savera group for organising the event, the Deputy Commissioner said that it was a humble tribute from for the marvelous service rendered by these heroes for the country. He said that it was our bounden duty to felicitate the ex-servicemen as gratitude towards their outstanding services to defend the security and sovereignty of the country. Sharma further said that such functions was need of hour as a token of respect towards the outstanding services rendered by our valiant soldiers who zealously guarded our borders around the clock.