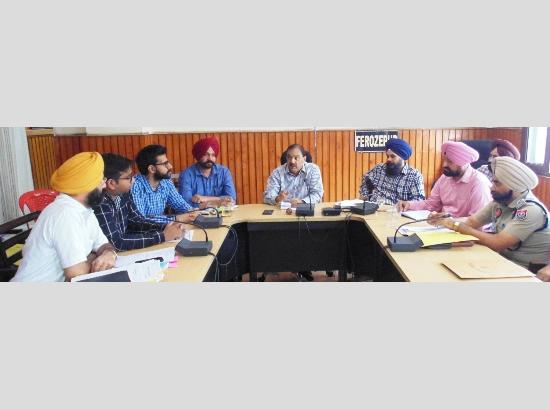 Ferozepur, June 20, 2019: Taking another stride in the war against drugs, deputy commissioner Ferozepur Chander Gaind has appointed six nodal officers in all six blocks of the district. These officers will independently lead the anti-drug drive and undertake all the activities such as awareness campaign, public meetings.

Presiding over a meeting to review the progress under anti-drug drive at district administrative complex Ferozepur, Mr. Gaind took the unique decision of appointing nodal officers under the drive. He said that the nodal officers will be responsible for the success of awareness drive in their respective blocks. They will undertake various activities such as organizing seminars, public meetings, carry out awareness drive in the villages of their blocks and achieve the target fixed by the government under the anti-drug drive, said the deputy commissioner. Whereas SDM’s to compile progress report of anti-drug campaign belonging to their blocks and submit to the deputy commissioner’s office, on which a meeting will be conducted to review the progress made by nodal officers.

After appointing various nodal officers, the deputy commissioner directed them to immediately initiate activities under anti-drug drive and visit the villages falling under their blocks. He exhorted people not to hate drug-affected persons and consider them to be patients as drug addiction is a disease like other diseases. He called upon people to come forward and bring their dear ones to the drug de-addiction centers in order to set them free from this menace. He further asked officials and appealed to masses to have a human approach towards drug affected persons and help them get back in the mainstream. Achieving this target we have to convert this drive in a mass movement where awareness and enforcement will go hand in hand, added Mr. Gaind. He asked officials to tell people to complain against the drug peddlers to the police department and the name of the informer will be kept secret besides giving cash prizes to informers under the new proposed policy.