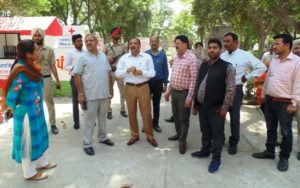 Ferozepur April 4, 2019: To facilitate the patients visiting the Civil Hospital, Deputy Commissioner, Chander Gaind, personally visited the entire hospital campus and spent about three hours and later on, had a meeting with the officers of Health Department.

Deputy Commissioner reviewed the working of each department and on-the-spot, orders were issued for bringing more efficiency in the working of the Civil Hospital.

He said that it is absolutely wrong to take the woman with labour pain to the first floor through strains or ramp.  He ordered to prepare a ‘blueprint’ to bring more improvements in the OPD department and ordered to shift the Gyne Ward presently at first floor to the ground floor,  for the convenience of the woman patients, within two-three days.

As per the delivery data, only 42 percent institutional delivery is in the hospital while the rest are going to the private hospitals or the midwives.  Deputy Commissioner asked the Civil Surgeon to take concrete steps for improving this trend.   He also asked him to rationalize the staff at all the five Community Health Centres – CHC by making internal arrangements.

Deputy Commissioner also ordered to set up a Help Desk at the entrance of the OPD building as the hospital is a big campus and the visitors some time feel difficult to locate the concerned department.

He also directed the civil hospital management to ensure the proper cleanliness of the campus daily and also directed to construct two more wash-room separately for male and female.

DC also had interaction with the patients about charging fee for various tests, to which they expressed their complete satisfaction.

He also expressed his satisfaction over the arrangements at the OAT Centre being run in the campus where more than 1200 patients are visiting for their daily dose.   He said it is a good sign that will power among the drug addicts is increasing and they are moving towards these centers to get rid of the drug addiction.