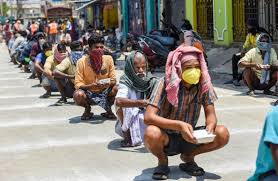 Jalandhar, April 2,2020L: In order to further maintain a proper database of the migrant labourers in the district to facilitate their native states for proper management of the COVID-19, the Deputy Commissioner Jalandhar Varinder Kumar Sharma today ordered a survey in the entire district.

The Deputy Commissioner, while chairing a meeting of the officers of the district administration, said that this was the need of the hour to ensure that a proper record was made for every migrant currently residing in the district. He said that this database would be sent to the respective home states of these migrants so that they could effectively combat the Corona Virus there especially in the post lockdown stage. Sharma said that this was a national duty and all the officers were duty-bound to implement in right earnest.

The Deputy Commissioner asked the officers to immediately dispatch the teams in various areas to record the information. He said that information should be collected only from the migrants and not from other populace. Sharma asked the officers to compile and submit the report by next week so that accurate database could be sent to the Government of India and Punjab government.