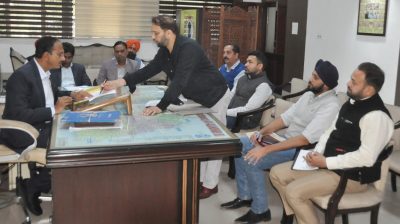 Chairing a meeting with the heads of the procurement agencies here today, the Deputy Commissioner said that 5.30 lakh Metric Ton of wheat was expected in the mandis during the upcoming marketing season. He said that the district administration would foolproof arrangements in all the 79 mandis of the district to ensure smooth and hassle free procurement in the district.  Sharma said that all the arrangements for the purchase in the mandis have been finalised and state government led by Chief Minister Captain Amarinder Singh was committed to lift every single grain from the mandis.

The Deputy Commissioner said that all the necessary arrangements this entire operation have been completed to facilitate the farmers.  Sharma also asked the District Mangers of all the procurement agencies to make sure that farmers do not face any sort of inconvenience during the season. He also said that adequate arrangements would also be made in the mandis to facilitate the farmers, who come with their golden harvest.

The Deputy Commissioner also reviewed the arrangements regarding availability of space for storage of grains, bales, wooden crates, poly tarpaulins and mesh nets in the district. He said that all the requisite logistics would be assured during the procurement operation.  Sharma expressed hope that the district would once again uphold the glorious tradition of smooth and hassle free procurement in the state.