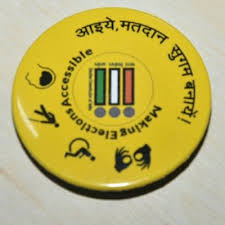 Nawanshahr, March 14, 2019: Launching the at the Suvidha Centre here today, deputy commissioner Vinay Bublani urged the people to be the part of the electoral process and take a pledge to exercise their franchise on May 19 to strengthen the democracy. ADC (G)  Anupam Kler and other officers and employees also put their signatures to take a pledge to vote.
“The target of  ensuring at least 80 per cent polling in the district has been set and to achieve the it, the district administration has taken steps like launching Facebook page, holding awareness seminars cum ‘Chunavi pathshalas’ in educational institutes to mobilise youth besides formation of electoral literacy clubs, mobilising parents through school students by getting the “Pledge Forms” signed, displaying voters’ awareness slogans at government offices and public places, honouring the first time voters etc.”, said the DC adding that 71 per cent polling was recorded during the last parliamentary elections and in the assembly elections held in 2017, the polling percentage was increased to the tune of 6 per cent, thus 77 per cent polling was recorded in the district. Now, the district administration had been making relentless efforts to further increase the polling percentage, to achieve the target of 80 per cent polling.
Deputy Commissioner further said that a toll-free number 1950 has also been started to answer the queries of voters and residents regarding their votes, lodging complaint or submitting any suggestion regarding poll arrangements.
Similarly to keep citizens vigilant on the violation of model code of conduct, a citizen-friendly App ‘C Vigil’ has also been launched by Election Commission of India. The App based on the android platform would be helpful to upload the snap or two-minute video on the spot to file a complaint. As soon as, the complaint would be filed, the GPS based location to be recorded at the control room and the same would be marked to the nearby flying squad team within five minutes of receiving. The team would rush to the spot within 15 minutes following by filing a report in the next 30 minutes to the concerned Assistant Returning officer or Returning Officer. After that, the concerned ARO/RO to respond to the complainant in the next 50 minutes. Thus, the complaint would be redressed in 100 minutes, he added.