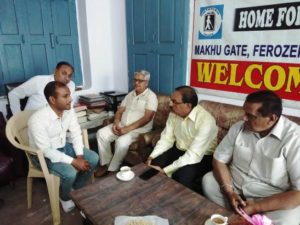 Ferozepur April 15, 2019:  Deputy Commissioner, Ferozepur Chander Gaind, during his visit to the Home for the Blind, run by District Council for the Welfare of Handicapped – expressed his pleasures over its dedicated members to look after the visually-impaired inmates by providing them free lodging and boarding and education facility.

Harish Monga highlighted the working of the institution started in 1954 by Dr.Sadhu Chand Vinayak – a philanthropist and since then a number of dignitaries have visited Home for the Blind, from to time. In the past, as many as 16 inmates of the institution have joined the government job as a music teacher in the education department against handicapped reservation quota. A documentary film – ‘Vision without Eyes’ was screened.

Conveying thanks to the district administration for helping the institution, he said, the institution is working comfortably now and donations in kind and cash are flowing from locals and abroad. The inmates are extended every facility to feel like home in the campus.

Deputy Commissioner showed a keen interest to know the history of each inmate and interacted with them individually.  Deputy Commissioner was happy to know while interacting with Kuldeep – who has recently joined the government job and preparing to crack the PCS or IAS exam – and gave him the tips with a word “Where there is will, there is a way”.

He said, the loss of sight by birth or later on in life due to certain circumstances is a natural process but at the same time, the people who are blind do have enhanced abilities in their other heightened senses of hearing, smell and touched as compared to the sighted people but still they need individual help, guidance, which Home for the Blind is extending to them to achieve many things despite visual impairment like the Helen Keeler and Louis Braille.

Deputy Commissioner asked the inmates to continue with their studies and asked the management members to bring to his notice for any kind of help to the institution as and when needed. He also appealed to them to use their right to vote in the coming LS Polls.

Earlier, Pankaj Khajuria entertained with his filmy dialogues, Sukhchain with songs in his melodious voice and Yash Paul on violin with old 60s-70s songs while Vishnu Parshad updated with the national, world and local level news. Shops and Malls to reoain open from 7 Am to 8 Pm for Raksha Bandhan: Sharma