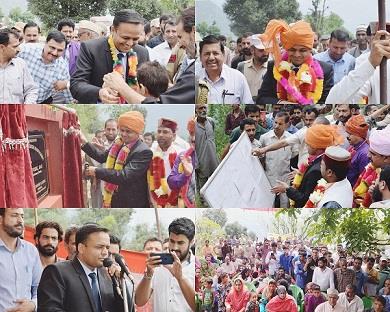 College to start functioning from this academic session
Our Correspondent:
DODA, JULY 18: District Development Commissioner Doda, Dr Sagar D Doifode today laid the foundation stone of newly sanctioned Government Degree College here at Kastigarh.
Addressing locals after foundation laying ceremony, the DDC said that a long pending demand for a Government Degree college of the people of the area has been fulfilled. He said Governor’s administration is committed to take quality higher education to the doorsteps of the people of rural and far-flung areas of the State.
”The government has already initiated several measures for strengthening the educational infra in the State so that people living in rural and far-flung areas get quality educational facilities within their catchment area”, he added.
While congratulating the people of the area, the DDC said that the establishment of GDC at Kastigarh would benefit about a population 34000 living in 8 surrounding villages of the Tehsil.
Approximately 44 kanal land has been identified for establishment of GDC Kastigarh with estimated cost of Rs 13 crores, he said and added that JKPCC has been entrusted with the job of construction of the college campus with all modern and requisite amenities within stipulated time.
He hoped that the establishment of this college will have a huge social impact on the area, besides it will reduce the financial implications on the students who earlier have to move to Doda to pursue higher education.
The DDC also conveyed warm regards to the land donors and said that the establishment of this college has become possible due to this benevolent gesture.
He informed the gathering that enrollment of 24 students has been made and more admissions will be made in the  coming days as provisional space for holding classes has been already provided in the higher secondary school building.
OSD to Advisor (G) Er Kishore Singh Chib also congratulated the people for new Degree College and assured the people that college infrastructure will be developed on priority and class work will start at the institution soon.
Others who were present during the foundation ceremony are ADDC Doda Imam Din, Principal GDC Doda, Tehsildar Kastigarh Raju Samyal, BDO Kastigarh Nazir Ahmed Shah besides other officials of district administration