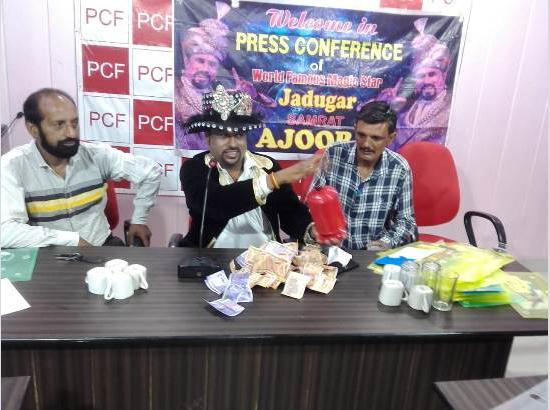 Ferozepur, June 13, 2019:  There is a need to preserve the dying art of magic – a rare and valuable art – as a national treasure and government should extend loan facility to the magicians to further develop this art by opening the academies, said Magician Samrat Azooba to the media persons at Press Club Ferozepur for launching a month-long Magic Show in this border town from June 14.

Samrat Azooba who has an interest in magic from his childhood inherited this art from his brother M.Sudan.  He has presented more than 25,000 shows but very much against its misuse in day to day life. He is also working in breaking the superstitions who have linked it with a superpower.

He said, magic enables people to experience the impossible and it used to inspire and bring wonder and happiness to others. It should be preserved, understood and promulgated.

Giving advice to the people, he asked the people to remain alert from the Yogis, Mahatmas and Babas who double the money by misuse of this magic art.

After showing few stunning magic items to the members of the Press Club, Samrat Azooba said, Except in California, there is no academy to train the magicians in the whole of the world.

He said, despite a number of odds in his life, I continued with it and now it has become my profession.   Funds were also collected by presenting the show dedicated to the Kargil victim families.

He said magic is a clean entertainment as there is vulgarity in its presentation and all family members can witness without any hesitation.  Treating the magic as a national heritage, it should be declared as a national treasure.

He said, magic is at the verge of dying and to keep this art – which was presented in the ancient time before the Kings – alive for the coming generations by extending the facility of interest free loan to start academy by any magician where they could pass on this art to the aspirant to take it as a profession besides making new inventions.

Modi performs yoga with 30,000 people in Ranchi
Under Central Motor Vehicle Act,  academic qualification of class VIII pass for driving licence will be exempted for one year.
Comment