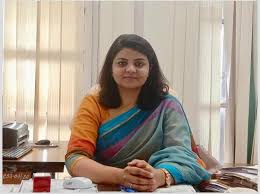 Kapurthala, 26 December 2019:  Deepti Uppal has assumed charge of Deputy Commissioner of Kapurthala on Thursday. Earlier, she was serving as Additional Secretary Personnel and Managing Director, Punjab State Industrial Development Corporation. She had served as ADC (G) at Kapurthala in 2016 and earned good name by her caring and generous approach towards the problems of  the people of Kapurthala.