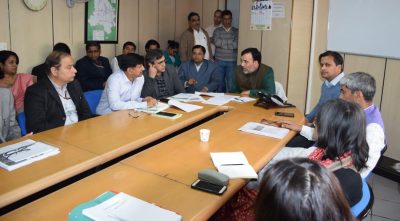 Delhi government aims to reduce 1/3rd of pollution levels within the next five years: Gopal Rai
New Delhi, February 20, 2020: Delhi Environment Minister Gopal Rai met with the environment department officials, DPCC scientists, and forest department officials to discuss strategic solutions to various environmental issues pertaining to Delhi. Briefing the media on the meeting held with the officials,  Gopal Rai said that the Delhi government has partnered with Washington University to obtain Real-Time Data to monitor the sources of pollution in Delhi. He also said that a roundtable conference involving environmental experts and agencies will be held on 27th February for assessing the environmental solutions for Delhi.

Addressing the media at the Delhi Secretariat, Gopal Rai said, “The environmental issues pertaining to Delhi have been a subject of constant deliberation and concern. When we formed the AAP government five years back, we have taken various measures to decrease pollution in the city. A lot of work has been done in this sector, as a result of which the Delhi government has been able to reduce around 25% of pollution levels in the city, along with the support of various agencies and the people of Delhi. During the Delhi Assembly elections, CM Shri Arvind Kejriwal Ji vowed 10 guarantees to the people of Delhi, a significant promise was decreasing the pollution levels in the city. One significant promise is to reduce the 1/3rd of pollution in Delhi, and another promise includes plantation of 2 crore trees in the city in the next five years.”

Gopal Rai informed the media that the Delhi government has tied up with Washington University for obtaining Real-Time Data on pollution. “They will release their final report in March this year, after which the Delhi government will be able to induct Real-Time Data to monitor the sources of pollution, and we will be able to measure our actions as well as the impact of these action plans,” he said.

The 13 hotspots in Delhi where the PM10 and PM2.5 concentration levels are generally higher are Jahangir Puri, Narela, Ashok Vihar, Vivek Vihar, Dwarka, Mundka, Rohini, Wazirpur, Okhla, Bawana, Anand Vihar, Punjabi Bagh, and RK Puram. Gopal Rai said that it has been observed that the PM10 levels and PM2.5 levels have significantly reduced in all 13 locations.

Gopal Rai said, “Various measures inducted that have created an impact are the 24-hour power supply in Delhi, which has reduced the use of diesel generators. There has been a considerable increase in tree plantation and greenery, the construction of East-West Peripheral Highway by the central government, the Dilli Ki Diwali Campaign. The Odd-Even campaign of the Delhi government, on the other hand, has sensitized people and impacted their mindsets, which has motivated them to follow the Odd-Even regulations and make the campaign a success.”

“The Chief Minister met with all the ministers, secretaries and officials of all the departments yesterday regarding the 10-point agenda of the Delhi government, to develop an action plan of all the departments. For this, we believe that environmental solutions should be treated as a mass movement. It needs the participation of all to fabricate solutions to all the environmental solutions. Second, an action team must be formulated consisting of people from multiple agencies, because all agencies play an important role in this sector,” he said.

Delhi Environment Minister informed the media about the major decisions taken in his review meeting with the environment officials. He said, “We have taken four major decisions in this regard. Obtaining Real-Time Data is the first and foremost step in this direction. For that, I will be visiting the headquarters of Washington University near Major Dhyanchand Stadium in Delhi, along with the university scientist headquarter tomorrow at around 1PM to understand the process of obtaining real-time data. Second, STPs have been created by the Delhi Jal Board to detect and monitor the causes of pollution of the Yamuna river. I will also visit the STP plant setup in Delhi Gate to oversee the treatment process and its functioning.”

A Roundtable Conference will be held on 27th February in the Delhi Secretariat. He said, “Experts from various NGOs and engineers from various departments will be invited to the conference. We will also incorporate their suggestions in dealing with various pollution issues.”

“A joint meeting of all the agencies including MCDs, PWD, DDA, RWAs, etc will be held on 28th February, wherein discussions will be held on how to spearhead the Delhi government’s ambitious project of the plantation of around 40 lakh trees in the city. We have already completed the plantation of 25 lakh trees, which has resulted in around a 25 % increase in greenery in Delhi. We will also hold a meeting with the environment ministers of all the other states, especially Uttar Pradesh, Haryana, and Punjab to discuss various issues related to environmental pollution in Delhi/NCR,” said Mr. Gopal Rai.

Ration will be available on all FPS, 7 days without any weekly off- Imran Hussain

Delhi govt will give Rs 5000 to each construction worker as  livelihood offers those affected due to COVID-19 outbreak: CM

Strict action from tomorrow against those violating lockdown: CM Kejriwal