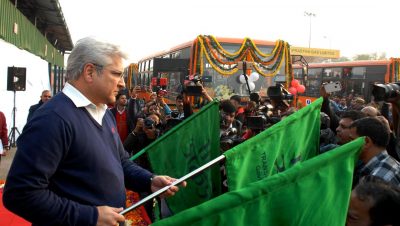 Buses flagged-off from Rajghat Depot, 329 buses already flagged off by CM in the previous months

By Varun Bhardwaj:
New Delhi, December 10, 2019: Delhi Law and Transport Minister, Kailash Gehlot on Tuesday flagged off the fourth lot of 100 new buses from Rajghat Bus Depot, from the 1000 semi low floor buses that started being delivered in October this year. Renu Sharma IAS, additional chief secretary cum commissioner of Transport, Manoj Kumar MD, DTC K.K. Dahiya, Special Commissioner transport, and Ram Shekhar, MD, DIMTS, were also present at the flag-off event. Earlier, Chief Minister flagged off 100 new cluster buses in the last month buses are equipped with ultra-modern facilities and state-of-the-art features like GPS trackers, panic buttons, CCTV, and hydraulic lifts for the convenience of the differently-abled. 429 buses have already been flagged off in the previous months. Transport Minister Shri Kailash Gahlot was also present in the flagging off event along with CM  Shri Arvind Kejriwal.Addressing the media, Transport Minister  Kailash Gahlot said, “It is another day of joy for all Delhiites as we have got 100 more new ultra-modern buses, fully equipped with CCTV cameras, GPS, panic buttons and hydraulic lifts for differently-abled. Safety and surveillance features in new buses include three CCTV cameras in every bus, a panic button on every alternate seat, which on being pressed in a time of need, will enable a large hooter to go off, simultaneously activating the command center at both Transport and police departments. We also have marshals deployed across all shifts for women safety in every Delhi bus now. As has been visible in the last few months, Delhi will now be regularly adding buses to its fleet. Our government is committed to adhering to its promise of not just ensuring sufficient and quality public transport, but strengthening Delhi’s overall transport infrastructure.”Salient features of the busesHydraulic lifts for the differently-abled to facilitate boarding and aligning of wheelchairsCCTV cameras for female safetyPanic button with hooterGPS for bus trackingComfortable seatsDetails of the busesThese buses are 37 seater buses. All buses have hydraulic lifts for the convenience of differently-abled. Also, 14 panic buttons have been installed inside the bus. Each side has 7-7 panic buttons. At the same time, three CCTV cameras have been installed inside the bus.New buses to ply on these routesUttam Nagar to Airport Terminal 2 – 20IGL Airport to Indralok Metro Station – 20Tilak Nagar to Dorala Border – 16Lumpura Border to Old Delhi Railway Station – 19Narela Terminal to Delhi Secretariat – 10Holambi Kalan JJ Colony to Shivaji Stadium – 8Ketwara Village to Old Delhi Railway Station – 71000 Low floor AC busesIn addition to the above buses, 1000 Low floor AC buses are also being inducted in the scheme. These buses will be suitable for boarding and alighting of differently-abled persons, elderly persons, children, and women.  The contract of 650 Low Floor buses has already been awarded by the Department of Transport for three clusters and these buses will start coming from January 2020. The tender for balance 350 buses is being floated.  Further, the Delhi government is also inducting 1000 Electric buses in phases. In the 1st phase, the tender for 300 Electric Buses (Low Floor, 12 meters) was floated on 15th October. The last date for the submission of bids was 13th November 2019. The financial bid for 1,000 low-floor, air-conditioned, CNG-run buses have also been opened.The tender process for 300 electric buses beginsDelhi Transport Corporation (DTC) has floated tenders for the purchase of 300 electric buses. These buses will be in addition to 1,000 cluster e-buses, which are already scheduled to be added to the existing fleet. The tendering process is likely to be completed by 15th December 2019. Financial bids for 1,000 low-floor, air-conditioned, CNG-run cluster buses have also been opened. As per the Delhi government’s budget for 2019-20, the e-bus procurement project was delayed by more than one year due to the Lok Sabha elections this year. Earlier, the Delhi government had approved tenders for the first fleet of 385 electric buses on 2nd March this year. The tenders were floated on 10 March, but the process was disrupted due to elections. 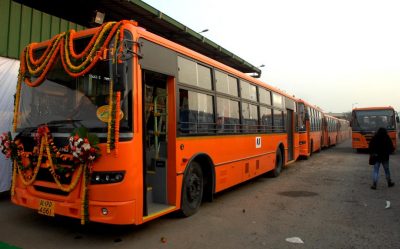