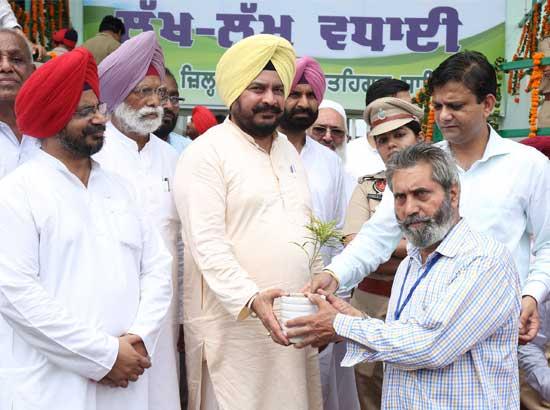 In his address Sadhu Singh Dharamsot said that the people of Punjab had made more than 80 percent sacrifices out of total sacrifices made during the freedom struggle. He said that the Punjab government was taking big initiatives to mark the celebrations of the 550th Parkash Purab of the Sri Guru Nanak Dev Ji falling in November this year. He said that the Punjab government has started a campaign to plant 550 plants in each village of Punjab to mark the Parkash Purab and this target would be achieved by September 30 this year. Till now more than 40 lakh saplings have been already planted.

Forest Minister disclosed that State Government had given a debit relief of 4700 crore to 5.62 lakh farmers of the state and compensation amount regarding the crop damage has been increased from Rs.8000 to Rs.12000. He further said that under the Sarbat Sehat Bima Yojna 43.18 lakh families would be able to avail the insurance benefits up to Rs. 05 lakh.

Forest Minister disclosed, ‘State Government is organizing the job fairs in September and more than 02 lakh jobs will be offered in private sector during these job fairs. More over 01 lakh youngsters will be assisted regarding self employment. He said that the construction of the Mega Dairy Project at Bassi Pathana was going on in full swing. The cost of the project is 358 crore and it will process 11 lakh liters of Milk daily. He said that govt. has initiated various reforms like transparent working, campaign against drug abuse, corruption, to provide better health and education services. Sadhu Singh Dharamsot said that around 33,000 drug peddlers have been arrested by the police besides taking stern action against the gangsters.

He urged the people to follow the path of love, brotherhood and communal harmony for the development of our society and country as shown by our Gurus and martyrs.  On this occasion school children presented an impressive cultural program. He handed over 25 sewing machines, 02 Wheelchairs and 09 Try cycles to the needy and honored the freedom fighters, prominent personalities, employees who excelled in their field and those who participated in cultural activities. Besides this he also handed over the job letters to 14 youngsters who have been selected in various companies including Tata Consultancy Service (TCS) after the completion of the skill development training and Training organized by TCS at District Bureau of Employment and Enterprises.

Moreover 10 farmers of the district were also honored who played an important role in water conservation under Direct Benefit to the electricity scheme. The Panchayat of village Badhoshi kalan was honored for the contribution in the installation of Seechewal Model in the village for water conservation and other steps taken for the development of the village. Forest Minister also declared a holiday in all the schools of the District on Friday (August16).