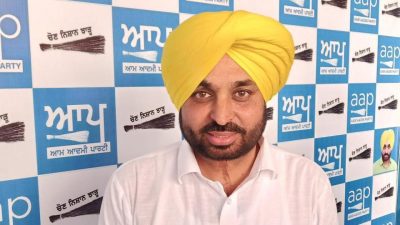 Chandigarh December 12,2019  :The Aam Aadmi Party (AAP) President and Parliamentarian Bhagwant Mann, sharply reacting to  the sham ‘dharna’ stage at Mohali by Shiromani Akali Dal, led by Sukhbir Singh Badal, against the sand mafia, said it was a political jugglery of the Badals, who protected and promoted the cult of sand mafia in the state.

In a statement issued from party headquarters in Chandigarh on Thursday, Bhagwant Mann said it sounded apocryphal that the Badals, who founded the sand mafia in the state during their 10-year rule, were now staging ‘dharna’ against it now to gain political mileage.

Mann said that the reason behind staging ‘dharna’ was a mere pressure tactics to pressurize the ruling Congress to enhance their share in the proceeds of the sand mafia, saying that their political gimmick was no secret to the people of Punjab that the Congress, the Akali Dal (Badal) and its alliance partners BJP were hand in glove to ‘loot’ Punjab, which spoke about their mutual bonhomie.

Mann said that earlier, the Badals, the progenitor of all kinds of mafias in the state, including the sand mafia, the liquor mafia and the cable mafia, were resorting to poitical dramas. He said it was during their regime that ‘sand mafia gained ground under their political patronage, saying that now the Congress was leading the nefarious trade, alleging  that they were staging ‘dharna’ against the sand mafia to score some political brownie points and pressurize the ruling Congress to enhance their share of the ‘booty’.

Mann added that were the Captain government seized off the welfare of the people of the state, it would have crushed the sand mafia by implementing the Telangana government’s mining policy in Punjab and given a push the sagging economy, he said, saying that the AAP, if voted to power in 2022, it would move heaven and earth to replicate the Telangana model to crush sand mafia in the state.