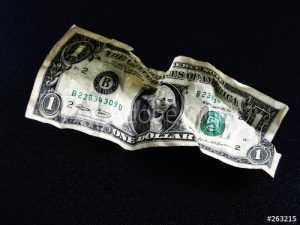 A well-respected speaker began a seminar by showing an audience of 150 people a crisp $20 bill. He asked, “Who wants this $20 bill?”

He said, “I am going to give this money to someone, but first….” Then he proceeded to crumple the bill up.

He asked the crowd again if anyone wanted it.

The speaker then dropped the money on the floor and stomped all over it.

He then raised it in the air to show the crowd. The money was filthy.

“Does anyone want it now?”

Every hand went up.

The speaker proceeded to tell the crowd that no matter what he did to ruin the money, people still wanted it because its value remained the same. It was still worth $20.

Life often beats us up to the point where we feel inadequate. We deal with bad circumstances and make bad choices that we have to deal with later. However, no matter what you go through, your value will remain the same. You have something special to offer that no one can take away from you.