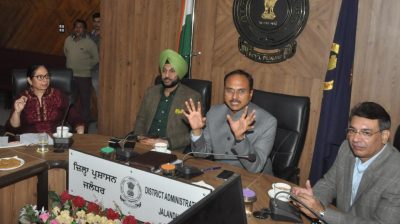 Unique ID Stikers to be pasted outside Houses of Home Quarantined Suspected Cases.

Jalandhar, March 21, 2020  ( By Madhur): The Deputy Commissioner Jalandhar  Varinder Kumar Sharma, Commissioner of Police Mr. Gurpreet Singh Bhullar and Senior Superintendent of Police  Navjot Singh Mahal today said that the district administration has started the process of distinguishing the suspected patients of Corona Virus by putting unique identification stickers outside the houses of such patients.

Chairing a meeting of District Covid 19 Management group here at District Administrative Complex, the Deputy Commissioner, Commissioner of Police and Senior Superintendent of Police said that in order to check the exponential rise in cases of Corona Virus this step has been initiated. They said that as per the initiative of the administration, the houses of the suspected patients who have been Home Quarantined would bear a sticker having the name of patients, father’s name, a period of quarantine, addition in the quarantine period, if any, name of the Doctor treating the patients and others. The officers said that this initiative would help in segregating the suspected patients from the rest of society thereby helping in containing the spread of Corona Virus.

The Deputy Commissioner, Commissioner of Police and Senior Superintendent of Police categorically said that people have to be made aware of the fact that the only way to keep a check on Corona Virus was to take the precautions. They said that the state government and the district administration have already embarked a major awareness campaign to make the people aware of this fatal flu. The officers sought the support of people in this war against Corona by taking as many precautions as they could.

The Deputy Commissioner, Commissioner of Police and Senior Superintendent of Police also urged the officers/ officials of the district administration to perform this duty zealously. They said that performing this duty diligently was the need of the hour as it was a real duty towards humanity. The officers also said that no stone would be left unturned in this noble cause to save the precious lives of people.

No passenger, squatter or vendor at all railway stations in Ferozepur Division
CMs appreciate the impact of PMs address to the nation on combating COVID-19
Comment