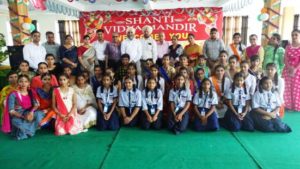 Amanpreet Singh, CJM-cum-Secretary, District Legal Services Authority said, the students from8th to 12th class will be given free general legal awareness and this project will be run by Ratna Garg and Itika Garg.

Speaking on the occasion, Parminder Pal Singh, Chief Guest of the function, motivated the students to plant maximum saplings to give a pollution free environment to the coming generation and put them wiser about their rights and duties.

Earlier, after the inauguration, a cultural programme based on patriotism and social evil giving message to the youths, was presented by the students, followed by distribution of ‘Tulsi’ plants with a promise to keep the planet earth green.

The school management – Kulbhushan Garg, Chairman, Mohit Garg, Director Academic, Ashok Garg,Secreary, Rohit Garg, Legal Advisor and Mrs.Rajni Madhar, Principal – all thanked the Chief Guest for sparing valuable time for visiting the school.  Later, the Chief Guest was presented with a Souvenir as a token and love and memory.