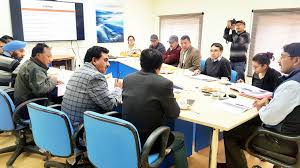 By SK.Vyas:​
LEH, JUNE 1​4​: The Divisional Commissioner Ladakh, Saugat Biswas reviewed the physical and financial achievements of various major projects being carried out in Leh district under NABARD, CRF, PMDP, AIBPB, PMGSY, UIDSSMT, AMRUT and NRDWP in a meeting held at the Div Com office Leh .
The meeting was attended by Deputy Commissioner Leh, Avny Lavasa, SE, PMGSY Tashi Chombel, concerned Xens and Engineers.
Div Com during the review meeting directed all the Ex-ens to prepare milestone-based-project timelines for all the pending and ongoing projects with a given timeline and submit it to his office in the next three days.
He directed DC Leh to ensure availability of photographs of all the developmental projects in upcoming review meetings. Biswas directed the engineers to have a thorough knowledge of each scheme and ensure fortnightly monitoring of implementation to maintain consistency in the execution of the works. Minutes of such review of works will be submitted with the Deputy Commissioner on a regular basis.
While reviewing the progress of ten major roads being executed under Central Road Fund (CRF) in Leh district, Div Com was apprised that a total of Rs. 12292.90 lacs have been approved for total 110.50 Kms road out of which Rs. 1421.16 lacs was released in the financial year 2018-19 and by ending March 2018 a total of Rs. 1334.89 lacs have been expended.
SE PMGSY TashiChombel giving a detail progress report of PMGSY roads in Leh district especially seven (7) major roads costing Rs. 129.50 crore said that by next 15 -20 days, Lingshed will be connected with fair weather road.
Under NABARD, a total of 12 schemes is approved for which Rs. 3643.34 lacs has been approved. Out of this Rs. 1116.00 lacs has been expended by the end of March 2018. During 2018-19 a total of Rs. 1250.00 lacs was further released and till date, two schemes have been completed and remaining ten projects are in progress. Likewise, under PMDP, a total of eight projects with a total cost of Rs. 1499.90 lacs was released out of total Rs. 1500.00 lacs and Rs. 790 lacs has been expended.
Giving detail of UIDSSMT projects being implemented in Leh town, Deputy Commissioner Leh AvnyLavasa said that a total of Rs. 217.35 crore stand sanctioned for major four projects including augmentation and reorganization of Leh water supply scheme, Sewerage System, Solid Waste Management and Improvements of roads out of which Rs. 154.40 crores was released and a total of Rs. 144.06 lacs has been expended by the end of March 2019. She said that 70% physical progress has been achieved under augmentation and reorganization of Leh water supply scheme and all the remaining works will be completed during the current season.
She further told that present Sewerage System will cater 60% requirement of the Leh town and STP at Agling for Sewerage System is yet to be completed which is at tendering stage at present and Solid Waste Management Plant across the mountain of Skampari Leh will be completed within a month.
Under AMRUT scheme, Divisional Commissioner was told that a total of Rs. 42.05 crore is approved for seven projects which include providing and laying of water supply network for left out portions of Leh town, development of multi-tier parking, improvement and development of parks, construction of overhead footbridge near SNM Hospital Leh, traffic management in Leh town by way of creating median divider and mini parking system, creation of green space at MagleyBhag and procurement of two Nos of Sucker and Jetting machines. By the end of March 2019 a total of Rs. 6.2984 crore has been expended under the project.
Under AIBP scheme a total of Rs. 47.70 lacs was released in 2018-19 out of the estimated cost of Rs. 1341.74 lacs. Out of which Rs. 47.65 has been expended by the end of March 2019.
In NRDWP a total of 25 schemes are approved with an estimated cost of Rs.  7320.90 lacs and by the end of March 2019 a total of Rs. 4700.97 lacs has been expended. Divisional Commissioner Ladakh directed PHE division to complete at least 10 drinking water projects in a current working season.