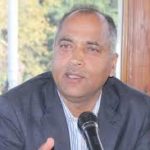 Shimla, March 4, 2019: The employees are the backbone of any government as they play an important role in effective implementation and dissemination of policies and programmes. This was stated by the Chief Minister Jai Ram Thakur while addressing the ‘Abhinandan Samaroh’ organized by Himachal Pradesh Non-Gazetted Officers Association, Sirmour district at Nahan today.
Jai Ram Thakur said that the state government has always maintained a cordial relationship with its employees and has ensured that they get the best treatment. He said that it becomes the duty of the government and the employees to work collectively for the betterment of the State so that Himachal emerges as the most developed State of the Country.
He said that the state government has announced to enhance the government contribution under the New Pension Scheme from the existing 10 percent to 14 percent in this year’s budget. This decision would benefit over 80,000 New Pension Employees of the State.
Jai Ram Thakur said that all the genuine demands of the employees were being redressed and they were being provided financial benefits from time to time. He said that the emoluments and honorarium of various categories of employees have been increased considerably to provide them relief and in future also all the genuine issues of the employees would be redressed in a phased manner.
He announced Rs. 10 lakh for the building of NGO, District Sirmour at Nahan.
The Chief Minister was honored by various employees Associations on the occasion.
Speaker, Vidhan Sabha Dr. Rajiv Bindal said that the present state government was employees friendly and has provided several relief and financial benefits to them.
District President of the NGO Rajinder Babbi welcomed the Chief Minister on behalf of various Associations of the employees and detailed various demands of the employees.
Health and Family Welfare Minister Vipin Singh Parmar, Member of Parliament Virender Kashyap, MLAs Sukhram Chaudhary and Suresh Kashyap, Chairman, State Marketing Board Baldev Bhandari, Vice Chairman, State Civil Supplies Corporation Baldev Tomar, Chairperson, Nagar Parishad Nahan Rekha Tomar, Programme Convener of the NGO Ved Sharma, President, Nahan Unit of NGO Aakash Bishnoi were present on the occasion among others.

Atal tunnel would be dedicated to the people by September: CM

Governor announces to give Rs. 51 thousand each to the women boxing players of Kinnaur district

Sports infrastructure needs to be strengthened in state: Governor