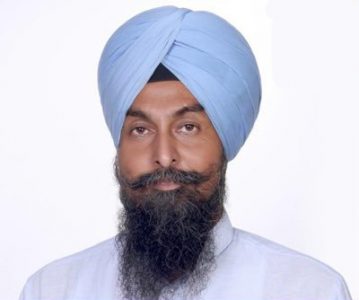 (…accuses Badals of keeping mum on the issue surrounding Punjab for fear of losing ministerial berth)
By SK.Vyas :

Chandigarh/Jalandhar, December 27, 2019: The president of Aam Aadmi Party’s state Kisan wing and Kotkapura MLA, Kultar Singh Sandhwan, has expressed his strong displeasure over the non-inclusion of Punjab state in the central government-initiated ‘Atal Bhu Jal Yojna’, saying it was a discriminatory act on the part of the union government.

The Kisan wing chief said that it was pertinent to mention here that the Union Government had announced the launch of the Atal Bhu-Jal Yojana recently with a view to improving the status of underground water in seven states, including Maharashtra, Haryana, Rajasthan, Gujarat, Madhya Pradesh, Uttar Pradesh and Karnataka at a cost of rupees six thousand crores, while Punjab was excluded from the list.

Sandhwan said that by not including Punjab, the largest contributor to the country’s grain reserves, in the much-hyped scheme indicated step-motherly treatment on the part of the union government.

The AAP leader was critical of the Badal couple – union minister Harsimrat Kaur Badal and Sukhbir Singh Badal for betraying the interests of Punjab and the Punjabis, simply to protect the ministerial berth of Badal ‘bahu’ (daughter-in-law) by bartering interests of the state to keep their unholy alliance with the saffron party going.

Sandhwan further said that only 27 percent of the total area in Punjab got canal water, a major share of had already been polluted due to industrial wastes, while 73% of the area was irrigated with the groundwater reserve. He added that, out of the 138 blocks in the state, water had gone down to an alarming level in 110 blocks, which had been identified as critical zones in the government reports.

He said that in such a paradoxical situation, keeping Punjab off the hook from such a significant decision was akin to step-motherly and unfortunate, saying the Punjab government should also raise its concerns against the injustice meted out to the state.

Modi government trying to snatch away the right of liberty from people: Sunil Jakhar