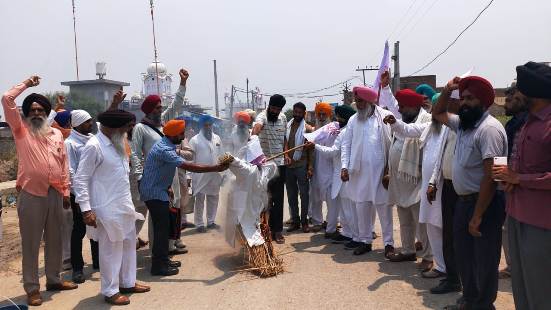 In its 8 Zones meeting of Core Committees of KMSC, under the tutelage of Inderjit Singh Kalli Wala, President condemned the anti-farmers policies of the government and decided to hold a massive protest on June in front of the DC offices.

In the meeting, the farmers condemned the introduction of privatization under the pressure of multinational companies and handing over the agriculture sector to the corporate houses by making amendments in the Essential Commodities Act 1955 and the introduction of Electricity Amendment Bill 2020.

Later the Ferozepur-Mallanwala road was blocked the effigies of the governments were burnt to register their protest.

Addressing the protesters, Satnam Singh Pannu, State President and Jasbir Singh Pidhi State Vice President, Ranbir Singh Rana, Secretary, Ranjit Singh Khacharwala, District Treasurer said, our agrarian markets are still living in the past. The open mandi mode in America and Europe has badly failed and India is in need to increase of a number of mandis from 7,000 to 42,000, regulated under the respective State APMC Acts, to strengthen the agriculture-mandi system by adopting the report of Dr Swaminathan for fixing the rates of crops by adding 50 profit in the actual cost and ensuring the marketing of each product at the level of the government.

They invited the farmers to participate in the dharna on June 8 in front of the DC office, to strongly register our protest to accept our demands.