Addressing the gathering, the Advisor underlined the need for maintaining sustained peace and tranquility to realize the cherished goals of growth and development in Jammu and Kashmir.

Paying rich homage to the heroes of Indian freedom movement, the Advisor said that the independence achieved by their sacrifices can be protected by maintaining peace, tranquility and harmony in the country and Jammu, Kashmir and Ladakh. He also paid respectful homage and salute to the brave hearts of the JK Police, Paramilitary and the Army who made the supreme sacrifice to preserve the territorial integrity of our country. 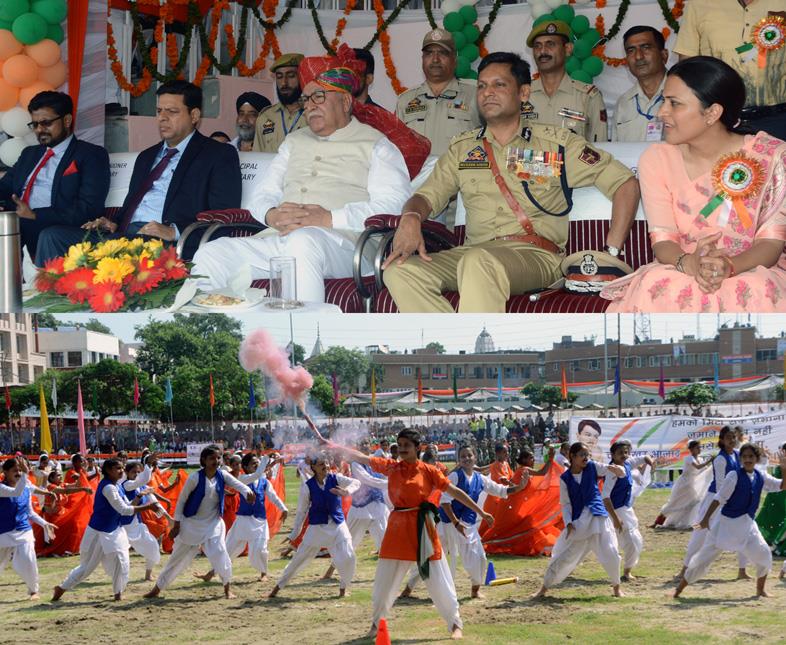 He said that the recent changes made by the Union Government have opened a new vista of development for the people of Jammu, Kashmir, Kargil and Ladakh. He said that a long pending demand of the people of Ladakh has also been fulfilled with the formation of a Union Territory of Ladakh. This will enable the people of Ladakh to realize their aspirations in spite of the problems they face on account of large and difficult terrain.

He said that Governor’s Administration initiated the first of its kind “Back to Village” Programme to create a sense of belonging and address the problems of locals in the remote and far-flung areas. The Gazetted Officers of the State visited the Panchayats and interacted with the people in a bid to resolve their grievances.

He further said that one of the biggest achievements of the state has been the empowerment of people through grassroots democracy. The state held elections to Urban Local Bodies, Panchayat elections. The turnout of the voters was 74%. Today, the state has a vibrant Panchayati Raj and municipal system which is fully empowered with complete delegation of funds, functions and functionaries.

Further, administration has started the process for conducting the elections of Block Development Councils and District Development Boards which will strengthen the democratic institutions at the grassroots level. He said the objective of constituting the block development council was to establish the second-tier of Panchayati Raj institutions for the implementation and monitoring of several centrally sponsored schemes. He stated that this budding Panchayati Raj system will be the harbinger of change in J&K.

On infrastructure development in Jammu, the Advisor said that the work on various languishing and pending projects including water and power sectors, centrally sponsored schemes like Ayushman Bharat, MGNREGA, Saubhagya, PMGSY, PMAY, BBBP are being implemented besides opening of new degree colleges, upgradation of schools and various other schemes are also on fast track.

Under PM Kisan Samman Nidhi Yojana, the first installment have been given to 50,000 farmers and 2nd installment of the same has also been distributed among 5000 beneficiaries of the scheme.

He informed the Government is organizing the first ever Jammu and Kashmir Investors’ Summit 2019 to be held between 12-14 October, 2019 to attract investments in various sectors of the economy of the state and to showcase Jammu, Kashmir and Ladakh as a favorable investment destination. The investment Summit will help in strengthening this sector and generating new employment opportunities.

To encourage youth in sports, the indoor stadium and playfield are constructed in each Panchayat and 25 sports projects would be completed in this year.

He called the youth to take the opportunity of government schemes like Startup India, Skill India, Mudra Bank yojana and various other programmes and play leadership role in the development of Jammu and Kashmir.

He said that the government has zero tolerance policy towards militants and Security Forces are taking proactive action against militants. Due to concerted and synergized efforts of Forces, there has been a discernible change in the approach of militants and their supporters.

He said that to mitigate problems of those residing in areas adjoining the International Border, the government has introduced the provision for grant of reservation in direct recruitment, promotion and admission in different professional courses, at par with those living along the Line of Control (LoC). Similarly reservation has been extended to the Pahari Speaking People and also Economically Weaker Sections (EWSs) of the Society.

He said that the annual pilgrimage to the Shri Amarnathji Shrine was conducted in a smooth manner and during a period of almost thirty days, the yatra witnessed an appreciable increase as compared to the last three years. He appreciated the efforts of organizers, police, civil administration and local people of Kashmir in making this yatra successful.

The Government has already initiated steps to fill a large number of vacant posts in various Government Departments in Jammu, Kashmir and Ladakh and in the very near future; recruitment drives by various Central and State Government organisations will be initiated.

The Advisor expressed hope that the new developments would help the region emerge as tourism hubs with better infrastructure creating jobs for youth and ushering in large scale industrial development, generating employment and growth, equality for women, full democratic representation for Refugees and Safai Karamchari. He hoped that people of Jammu and Kashmir will now see benefits of Central Laws and Schemes and that the Panchayati Raj Institutions (PRIs) and Urban Local Bodies (ULBs) will become instruments for local self governance.

Later, the Students of various educational institutions presented variety of cultural items which enthralled the audience.